Keyboardist Derek O’Neill, of King Creosote fame, recently added a Solid State Logic Sigma to his personal studio equipment line up with stunning results. For O’Neill, the addition of the Sigma, along with SSL’s legendary Stereo Bus Compressor, made all the difference whilst working on Sound Design for the recent project From Scotland with Love, a film and soundtrack released for the 2014 Commonwealth Games in Glasgow. 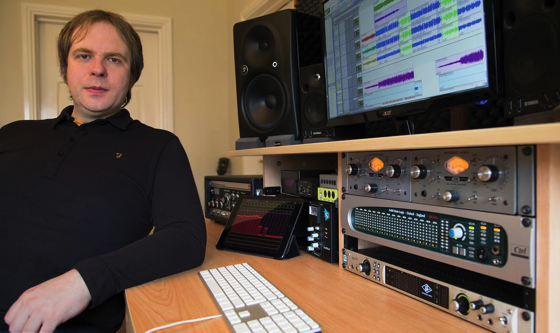 Designed for the DAW user that seeks the legendary big sound of an SSL console while retaining the convenience of working in-the-box, Sigma is a unique DAW automated SuperAnalogue™ summing engine. “I became familiar with the SSL sound over at Chem19, a recording studio where I record and engineer that features an SSL AWS console,” says O’Neill. “I feel like I had hit a brick wall mixing in-the-box in my personal studio. The mixes I was doing sounded almost choked and I needed to really work to get a good sound. At Chem19, I found the mixes using the AWS were great sounding with a lot more depth and clarity. While researching what to add to my home kit to solve my sonic problems, I came across Sigma, this brilliant rack-mounted item created to lift my in-the-box mixing to the next level. I ran previously recorded audio through Sigma during the installation and it made a giant difference. The mix felt a bit wider, had the same clarity and depth as the AWS, and those were the exact qualities I was looking for. The Sigma sounds just amazing. It’s magical really.”

O’Neill put together his private studio to work on his own projects and to provide an affordable creative haven for groups working their way up. Some projects are started in O’Neill’s studio, then move on to a Chem19-level facility for mixing, or alternatively tracking is done at Chem19 with mixing done at O’Neill’s studio. Having Sigma means the resulting tracks translate back and forth.

“Sigma delivers the sonic elements I need to make critical, creative decisions that work well in the outside world and with other studio situations,” O’Neill comments. “The unit gives me the flexibility to take on larger mix projects without the need of a large console. Sigma is a fantastic box, it’s really amazing and, for all that sound, at an amazing price.”