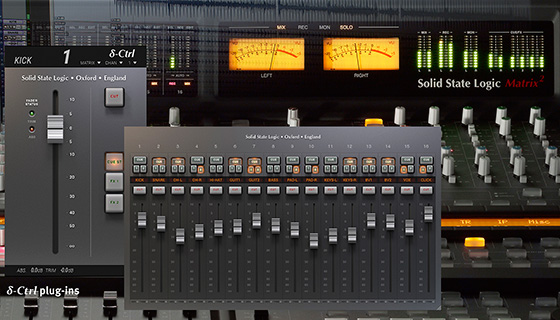 Now in 2017, Matrix receives a significant update with the introduction of δelta-control (δ-Ctrl) software. Used across the SSL studio console range including Duality, AWS, Sigma and now Matrix, δelta-control is a collection of DAW plug-ins that allow analogue console automation to be recorded, edited and replayed via the DAW. δ-Ctrl automation data is cross-compatible, meaning you can start mixing on one SSL δelta-enabled console and then continue on another.

With this update, Matrix’s ‘Auto’ menu receives several new features to enhance mixing using δelta-control. These classic SSL automation features include the staple ‘Join’ and ‘Revise’ functions that offer a true SSL console ‘mix by section’ workflow, as used by many leading engineers.

In order to use δelta-control, existing users will need to purchase a δelta-control iLok plug-in license, available via the SSL webstore. It is also necessary to update the internal Matrix software for free to V3.

The upgrade will be available in May 2017 via the SSL website.

Delta Control plug-ins are available in all major DAW formats including AAX, AU and VST3.

Solid State Logic is distributed in the UK by Sound Technology Ltd. For more information please call 01462 480000 or visit www.soundtech.co.uk/ssl.