Solid State Logic and UK distributor Sound Technology Ltd will present the new SSL Matrix 2 for the first time in the UK at this week's Music Production Show in London (Sound Technology Ltd Stand number 38). Don’t miss the chance to get hands on with Matrix 2 - and the new SSL Sigma Remote Controlled Analogue Mix Engine - at the show which takes place at Emirate Stadium on Friday 29th November and Saturday 30th November. 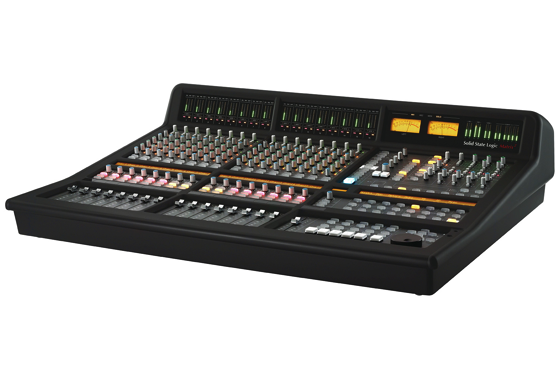 Since its 2008 launch the SSL Matrix console has established a high profile clientele who value its unique capabilities as a genuinely hybrid production platform. Its combination of SSL analogue summing, streamlined integration of boutique analogue outboard mic pre's & processing (via its software controlled analogue patch system) and advanced DAW control surface, provides production power and flexibility like no other console. This new version of the Matrix takes feedback from customers and provides a collection of powerful new features.

One of the unique and much praised features of Matrix has always been the integrated software controlled patching of analogue channel inserts and this has been significantly upgraded in Matrix2. Hardware device inserts can now be loaded directly from the console hardware controls (previously this was done only via the remote browser software) with an intuitive new interface that facilitates loading individual processors, A/B comparison of different processors and building processor chains. The Matrix remote browser software has also been re-designed to provide a new ‘drag and drop’ style interface for loading processors and building chains.

The A-FADA (Analogue Fader Accesses DAW Automation) summing system used in Duality, AWS and the new SSL Sigma rack has been introduced to enable the analogue faders of Matrix2 to be driven by automation data from your DAW. A-FADA enables channel automation to be performed entirely in the analogue signal path but with the advantages of DAW automation data editing. The addition of A-FADA to Matrix2 facilitates project portability between different SSL products.

A powerful 'Fader Linking' system has been added to the console which allows two or more faders to be grouped, to facilitate stereo or 5.1 channel control or subgroup style mixing. And the previously optional 5.1 output card will now be included as standard pre-fitted in all units.

All of these new features (excluding the 5.1 output card) will be available to existing customers as a free upgrade.

SSL is distributed in the UK by Sound Technology Ltd. Please call 01462 480000 for more information.

Find out more and buy tickets for the Music Production Show here.