At InfoComm 2012, HARMAN's Soundcraft(r) is showing its first release of the Soundcraft ViSi Remote iPad app, now available free of charge on the iTunes store, which enables a single iPad to control multiple consoles from the Soundcraft Si Compact range on a single wireless network. 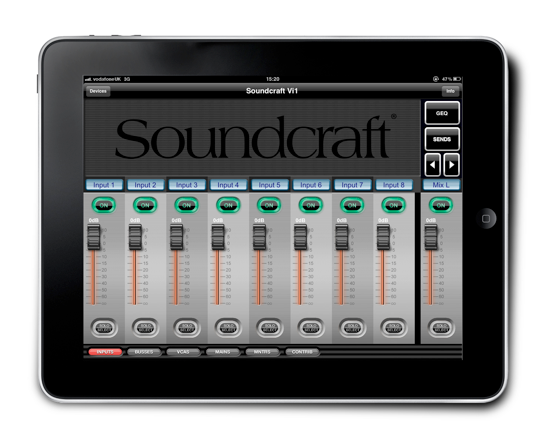 The Soundcraft ViSi Remote app allows users to roam around a venue and not only adjust input channel levels and mutes, but also adjust aux send levels and matrix sends, and level and graphic EQ settings on bus outputs. The ViSi Remote app also allows Soundcraft Vi Series consoles (including Vi1, Vi2, Vi4 and Vi6) to be controlled (forthcoming desk software update required). A single ViSi Remote app can then control a network of mixed consoles from the Vi and Si Compact series, a feature not found on many comparative systems. Anyone can download the free app and get familiar with its operation, including Vi console users prior to the release of the console software upgrade.

The app uses HARMAN's HiQnet(tm) architecture to connect the network of consoles to a wireless router, which communicates with the iPad.

For even more flexibility, multiple iPads may be used on the same network, even on the same console, so that individual artists can control their own monitor sends, for example.

App Store, Apple, iPad and iTunes are trademarks of Apple, Inc., registered in the U.K. and other countries.