Set up 30 years ago, and today providing a vast range of technical services, including sound reinforcement, radio comms, full AV, CCTV and access control, Kildare-based Mongey Communications needs to maintain its inventory at the cutting edge in order to provide top drawer reinforcement and network control for some of the biggest events in Ireland. 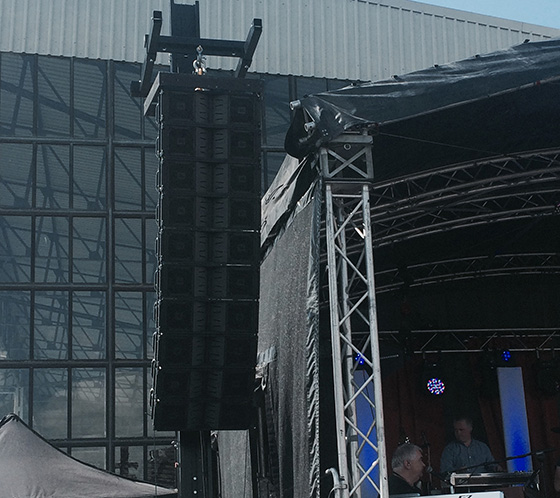 This led to them recently purchasing a substantial JBL VerTec VT4886 Subcompact system and Crown VRack amps. According to director David Mongey, who runs the family owned business with brother Cyril, the acquisition marks a return to the brand that his company first invested in around two decades ago.

“We cover a wide range of events, from European summits to major sporting events, and provide services from access control to broadband; our policy is to buy only the best,” he stated. “Our existing front-line PA system was starting to get tired — and Joe East [of HARMAN distributor Sound Technology Ltd] invited us over to hear the new VT4886 Subcompact.”

The Mongey brothers, along with Project Manager, Dermot O’Brien, were soon listening intently to the system rigged in the Letchworth demo facility of the UK & Ireland distributors. “Cyril and Dermot are the most demanding of engineers to satisfy but were very impressed — as was our main FOH engineer,” Mongey continued. “It not only met the requirement for a compact footprint but also Health & Safety in terms lifting and weight reduction. This was fundamental, as a one-to-two man lift represents a huge cost saving over requiring five or six crew to manage it. Also, it sounded superb and the throw distance was really significant.”

As a result they placed an order for 24 VT4886 passive three-way line array elements, each weighing just 15.4 kg, along with 12 x VT4883 cardioid arrayable subwoofers with Sound Technology. Also included in the package were six JBL VTX F12 12in bi-amped system for floor monitoring, along with two Crown VRacks (containing IT12000HD and IT4x3500HD amplifier modules) to drive the system.

This gives the production company many options in terms of both configuration and the sources they are looking to reinforce, since the system is as comfortable with music as it is for speech intelligibility.

“To give an example of performance,” David Mongey continues, “the JBL system, when configured on our two portable wind-up towers could cover the sound requirements for some of the Gaelic football stadiums that we were invited to enhance. The throw and the SPL’s were impressive for such a small and compact system and the response from the client was very positive.”

A recent high profile event successfully serviced by the JBL rig was a major American College Football match at Croke Park. “With series of sub’s and three tops tilting back into the stands it easily boosted the razzmatazz associated with these games. It really rocked the house and the stadium manager said it was one of the best systems he had heard.”

At the other end of the spectrum, for major conferences they can field any combination or permutation, either flown or on stands. “It offers an amazing amount of versatility,” he notes. “It is really doing the job for us —and it’s so quick and easy to set up using JBL’s Line Array Calculator [LAC], it’s almost plug and play.”

JBL and all Harman Professional products are distributed in the UK and ROI by Sound Technology Ltd.  For more information please call 01462 480000 or visit www.soundtech.co.uk/professional-audio

A new range of JBL bags, covers and backpacks are now available in the UKJBL Professional by HARMAN and…

The VT4886 Subcompact Passive Three-Way
Line Array Element is designed to deliver high-quality reinforcement of music and speech in a
wide variety of applications including concert
audio and corporate A/V presentations of all
types for both portable users and fixed venue
installations.

The VTX F series is a line of multi-purpose loudspeakers designed to give sound production companies a variety of flexible options for deploying high-quality audio, either as a stand-alone FOH system, a satellite and subwoofer system (with companion VTX F18S), or on-stage floor monitor and fill speaker.