The first deployment of JBL’s new all-weather AWC stadium speakers has taken place at one of the oldest professional football clubs in the UK.

The 125-year-old Preston North End (PNE) has relied on the services of public address specialists TG Baker to keep its audio fit for purpose for nearly two decades.

Project manager Jason Longworth recalled, “We were sent a couple of speakers for evaluation by [Harman Professional UK & Eire distributors] Sound Technology and we put them through their paces and really liked them.” The AWC129 itself is a compact, coaxial-driver, 2-way, highly weather-resistant (IP56) full-range loudspeaker which is ideal for speech and music.

Faced with installing these as part of a complete PA/VA upgrade for the entire stadium, TG Baker proposed the new JBL enclosures to the client before specifying eight — spaced equidistant along the top of the terrace. 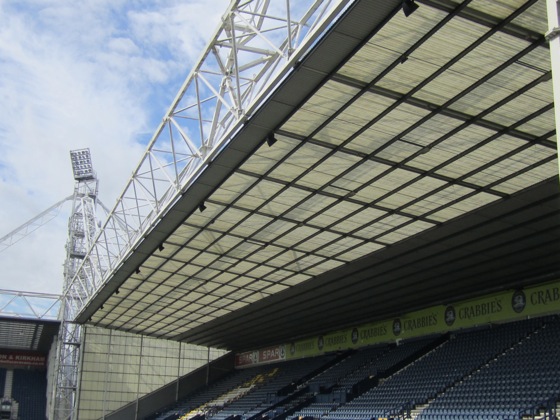 Having refurbished Deepdale’s four stands incrementally over a long period of time TG Baker has come into contact with a wide number of loudspeaker brands. But Longworth was clear why the new JBL solution ticked the boxes this time around.

“The AWC 129 offered a consistent 90° x 90° pattern control — meaning we could cover from top to bottom of the stand with a single point source. Also, after testing the speaker we realised we could run it without a separate sub — unlike the East Stand (which it faces).

“The response from the AWC’s, and the fact that we have been able to provide a single box solution, was the main reason for using them. They also offered great performance versus price and have proved extremely cost-effective.”

The speakers are mounted onto the existing girders via U-brackets, with secondary safety ropes and chains — providing a straightforward swap-out with the old system, which after 15 years had reached end of life.

At the same time TG Baker has upgraded the voice alarm front end with a digital system for match day control — although line and mic feeds into the new JBL system are from the existing DJ equipment, mixing desk and radio mic.

In summary, Jason Longworth said, “We are already talking to another client about adopting the same solution, as the acoustic engineers — including commissioning engineer Craig Bibby — were delighted with the audio clarity of the new JBL All Weather speakers.”

The new system was commissioned late on a Friday — just hours before the opening friendly match of the season … against Liverpool FC.