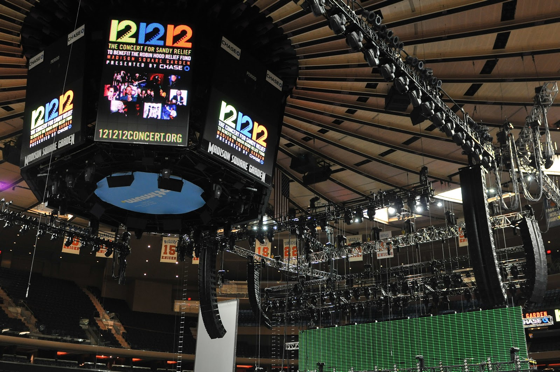 “We had to be completely at the top of our game for this one—although we’ve done many high-profile events, it’s not every day we get to do the sound reinforcement for a concert that’s broadcast around the world to more than a billion people,” said Mark Dittmar, Lead Design and Integration Engineer of Firehouse Productions. “We’d been using JBL VERTEC® line arrays for more than a decade and that product has been spectacular in terms of sound quality, relative light weight and versatile rigging options. That said, with JBL VTX the sound quality we can achieve has gone up a whole other level. VTX sets new standards in clarity and impact, and delivers a consistently smooth and natural response.”

“In fact, the low end from the VTX V25 main arrays is significantly increased—to the point where we’re not flying subs with the system. We stacked the S28 and G28 subs on the ground to give the system additional low-frequency impact but we did not need to fly subs as part of the main array columns as we have in the past.”

“We have used Crown amplifiers ever since we started Firehouse,” Dittmar noted. “The IT12000HD offers us power and flexibility that we can’t get with other products. With the introduction of the VTX line arrays and the newest V5 DSP presets for VTX, the sound quality is spectacular.”

“12-12-12 was one of the most challenging projects we’ve ever done,” Dittmar concluded. “Funny enough, though, the PA turned out to be one of the simplest aspects of the project. Using all JBL line arrays all around the Garden made a huge difference in getting the sound to be consistent throughout the arena, and consistently excellent.”

HARMAN Professional products are distributed in the UK/ROI by Sound Technology Ltd | 01462 480000 | www.soundtech.co.uk