The Student Union at the Royal Holloway University of London host a variety of events at a multifunctional venue, which include live music, clubs, conferences, theatres, trade shows, etc. Its technical crew is responsible for approximately 10 different productions a week, and recently purchased a HARMAN Soundcraft Vi1 in order to train more students in front of house (FOH) audio mixing. 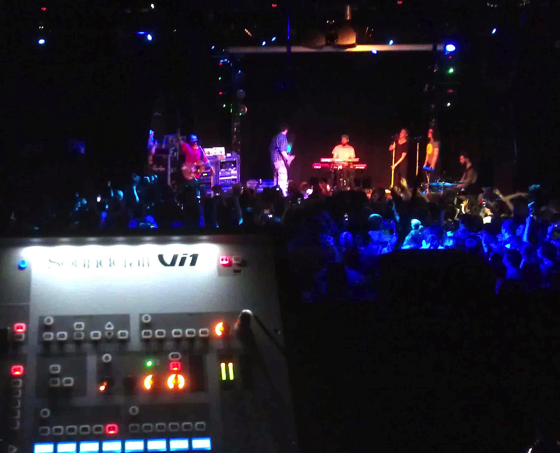 Photo above: Soundcraft Vi1 at Royal Holloway University of London

“I purchased a different brand of digital console 18 months ago for our FOH training. My staff here consists of students and it was taking them quite a while to learn on that console, so we started looking at the Soundcraft Vi Series for a replacement. After working with the Vi1 I knew instantly that the user interface was far more straightforward and more intuitive for the crew to learn,” said Karl Travers, Technical Manager of the Students Union, who purchased the console through UK-based Arc Sound.

The highly praised Vi1’s UI became popular due to its widescreen Vistonics™ interface, which retains the same ‘walk-up’ user-friendliness of the other Vi consoles. It displays all parameters for 16 channels side by side, on a single 22-inch Vistonics touchscreen. Also, the Vi1 includes built-in Lexicon effects as well as GEQ’s on all output busses, eliminating even more hassles such as additional sound equipment.

“I’ve found that the console UI is very user-friendly with a short learning curve, which has enabled me to get my staff trained in a short amount of time. This in turn leads to quick and confident operation during shows,” said Travers.

The Soundcraft Vi Series is the ultimate console for people who need a fast setup and an easy-to-use experience. It is the perfect solution for running shows with multiple acts or back-to-back events such as those that Travers is responsible for.

“In the last few weeks we’ve done about seven club nights, a few bands, live PA acts with MC’s and several conferences. So far, the Vi1 has performed extremely well, and the user-definable pages make setup for different shows very easy. On top of that, its gain structure is sweet and requires little work to achieve the desired results,” Travers added.

Soundcraft is distributed in the UK by Sound Technology Ltd.