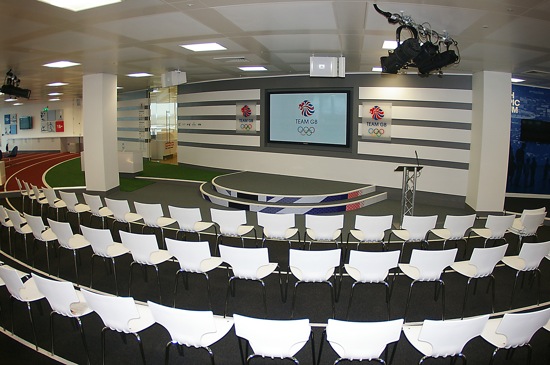 Soundreinforcement in the stylish Hospitality Suite, complete with stage andsimulated running track, are threewhiteceiling-mounted JBL VRX932LA enclosures, two either side of the stage,operating as a single pointsource with the third used as a delayed fill forthe rear of the rectangular room. For LF extension a VRX 915S single 15in reflexsubwoofer is ground mounted off stage, while an auxiliary VRX 915 comes intoplay whena party vibe is required, or when a DJ plugs into the input providedfor the purpose (there is also a mini-jack plug-in for MP3 background musicduring the day).The main systemis powered bytwo Crown CTs 2000power amplifiers. 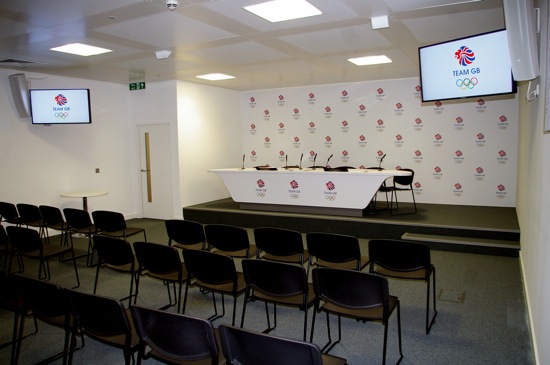 Elsewhere,around the perimeter are 14 JBL Control 52 surface mount satellite speakersdivided into two zones (of eight and six respectively) to ensureintelligibility throughout the area, each driven by a Crown CT8758-channelpower amplifier.

Alsoconnected to BLU-Link is a BSS BLU-120I/OExpander at the back of the press conference room which feeds a stage box with16 x XLR's — providingaswitchable line level output facility for use by broadcastcompany cameracrews.

TheCentre will operate without a sound mixer over its 18 hour daily duty cycle —instead an iPad with custom GUI will be usedto facilitate source switching, content selection andaudio volume/mute control across allzones

SaidThomas Martelli, “We owe a lot to our principal suppliers, such as the SoundTechnology project team for their professional support.For a project as high-profile andtechnically complex as this, we felt it was criticalto its success to involvethe in-house technical resources of Sound Technology and other suppliers.”

Following the conclusion of the Olympics Games, Team GB House will be handedfrom the BOA to the British Paralympic Association (BPA), to become ParalympicsGB House forthe Paralympic Games. At theconclusion of that, the site will be completely decommissioned and thetechnical equipment will go on to start a new life elsewhere.

In conclusion, Netpractise operations director, Ian Wilks, stated, “Having worked on previous projects for the British Olympic Association,we were delighted to be given the opportunity to deploy the AV technology forTeam GB House. The client brief dictated that a robust, flexible and innovativesolution was required and it was decided that the Harman Pro range of audioproducts were a perfect fit and complemented the videodistribution components.Working closely with the Sound Technology technical team, from the initialdesign phase, through to installation and final commissioning enabledNetpractise to deliver ahead of time and ensurethat the audio system exceededexpectations.”