UK and Eire distributors, Sound Technology Ltd, confirm that their premier dealers, SSE Audio Group and Adlib have already successfully conducted dedicated demo days, introducing the facilities of the desk to enthusiastic audiences of sound engineers and touring and venue personnel, while Kent-based Phonophobia’s Mark Chant says he expects his new Vi3000 to be permanently out this summer. �On top of that Adlib has also confirmed the first installation desk to the University of Liverpool’s Guild of Students — one of a suite of Soundcraft consoles and racks supplied to the Students Union as part of an extensive refurbishment of its technical facilities.

With MADI and Dante fitted as standard, and swappable I/O ports available, the Vi3000 eliminates the need for venues such as Liverpool Uni to hire in additional outboard to meet the needs of touring engineers.

With 96 mix channels, the Vi3000 is the first Soundcraft console to incorporate a Dante interface as part of extensive connectivity, with a full complement of analogue and digital I/O’s and upgraded DSP. The console also accommodates the new Soundcraft RealTime Rack, designed in collaboration with plug-in manufacturer Universal Audio, that provides access to 74 industry-standard UAD plug-ins.

With the company’s established reputation as a Vi User, SSE Audio Group wasted no time in securing one of the first Vi3000s — and sound engineer Chris Courtney immediately had it out at the Isle of Wight Festival where he mixed monitors for Travis. 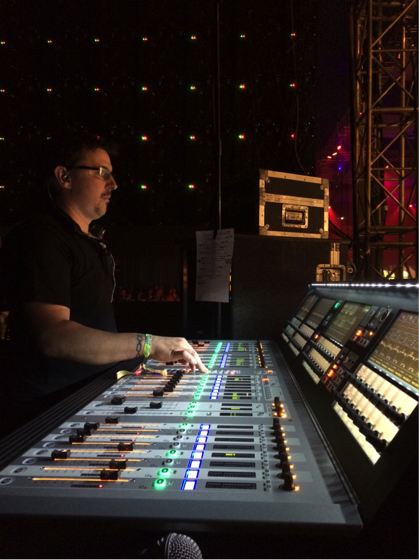 Photo above: Chris Courtney with the new Soundcraft Vi3000 mixing monitors for Travis at the Isle of Wight Festival 2014

SSE Sales Director, Alex Penn, confirms, “We saw the new console for the first time at Frankfurt Prolight+Sound; it sits neatly between the Vi1 and Vi4 and offers many new features which will secure the longevity of this series, which has always been popular with engineers. He immediately highlighted the enhanced DSP, MADI/Dante interface — and the much requested access to Universal Audio’s plug-ins and Soundcraft RealTime Rack plug-in engine. “The rack can also be used with our existing Vi6 inventory,” he continued. “We have a pool of sound engineers who are existing Vi users and it will be useful to let these guys know about the new facilities on offer with RealTime rack.” “We also see a lot of potential in SSE Sales and Installations for the Vi3000 with its very competitive price point and new facilities, as this is the first time a large format Vi control surface has been available to the market at this level and it will integrate very neatly and cost effectively into venues with existing analogue infrastructure.”

Another speaking of the Vi3000’s installation merits is Adlib director, Dave Kay. He stated, “This is a really easy board to walk up to and with 96 inputs and 24 stereo busses, it can handle much more complex shows when required without the venue having to rent in a different console.

“Because the DSP core is integral to the surface, it is a more compact package plus there are a lot more options to increase the I/O count and types of interfaces compared to that of a Vi1.

“The Dante integration will be useful for virtual soundcheck and playback from other sources too.”

And Phonophobia’s Mark Chant added, “Having MADI and Dante built into this desk gives Soundcraft a massive advantage as does the additional functionality, with the local ins and outs on the board.”

The first high profile appearance of his Vi3000 was at a University of Kent Summer Ball in Canterbury, attended by around 4,000 students and headlining Ella Eyre. 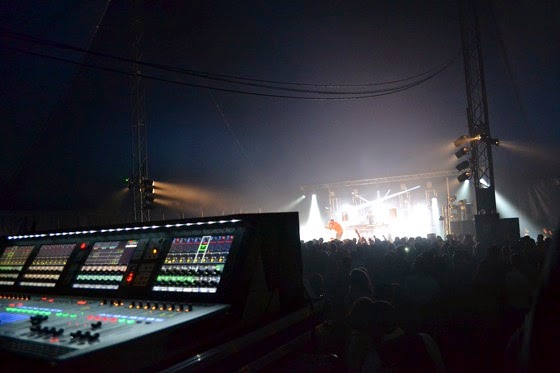 “Visiting engineers patched in through Dante or MADI, and since we have a lot of riders now showing Vi1 or Vi6 most seemed excited to be using the new desk, and turned up with their show files and used the [Universal] plugins.

“This feels like a Vi desk — but is vastly superior, and the Vi3000 will be out constantly. Since we have advertised it on our website we have received a steady flow of inquiries and the interest has been incredible.”

The open days had been presided over by Harman Professional’s Tour Sound Application Engineer, Ed Jackson. “The purpose of these presentations was also to introduce Soundcraft’s new V4.8 software,” he explained. “We also discussed the new Dante card and the options for networking with multitrack audio and talking to other desks over Dante. We also talked extensively about the RealTime Rack which is a useful piece of kit for freelance and rental houses. “In addition to the MADI on the desk, you can plug into a laptop with Firewire and use that with your DAW to do pre-production with multitracks at home, in your hotel room or on the tour bus. It gives you a lot of flexibility.”

And Ian Cullen, Sound Technology marketing director, concluded, “We couldn’t have asked for a more positive start to this launch. Reaction within the first month —both to these regional open days as well as our own here in Letchworth — has been 100% positive.”