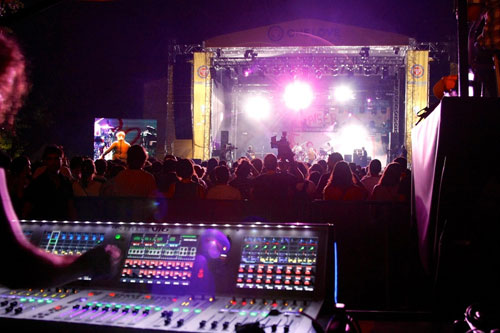 In 2007, Kaiser Chiefs were about to embark on their largest and most ambitious arena tour to date in order to support their second album, Yours Truly, Angry Mob, when their previous engineer decided to give up his position. Leckie came on board and adjusted to the task, but was always jealous of the Soundcraft Vi6 console that was on tour with them to handle the opening acts. “As the tour progressed I found myself experiencing console envy!” said Leckie.

Leckie noticed how easily visiting engineers, from youngsters to experienced professionals like him, became acquainted with the feature set of the Vi6 and produced stunning results. “I quickly realized I needed to switch allegiances,” Leckie said.

During the European part of the tour, which is currently taking place through the end of July, Leckie and monitor engineer, Ilias Andrianatos, have been able to use the Vi6, which is now their console of choice. However, during the preceding North American leg of the tour, it was not logistically practical to transport the Vi6 around the country. “HARMAN and Soundcraft were helpful in supplying a pair of the more compact Vi1 consoles to be used by me and our monitor engineer. This allowed us to retain most of the facilities available to us on our Vi6, and keep some degree of consistency from show to show.”

Many challenges come with being a sound engineer for Kaiser Chiefs, according to Leckie. “They dont play to a click track which adds difficulty to my job. There isnt a rack of equipment sending me identical program material at the same level every night, and if I am going to keep a handle on the somewhat unpredictable, wriggling beast that is a Kaiser show, I need to see what is going on at all times and have access to everything as quickly as I would on an analog board. Soundcraft and the Vi Series does that, and at any point I can see EQ, gates, compression, effects, etc., on every channel, rather than having to negotiate my way through multiple tiers and screens.”

While on tour, Leckie explained the importance of having a reliable console that can perform in any situation. “I also need a console that is easy and quick to use, and on top of everything, it needs to sound good.”

“With each software update the desk gets better, with sensible and useful additions that continue to make my job easier and more enjoyable. The new user layers allow me to arrange faders into convenient locations for specific songs,” Leckie said. “This has been a revelation! The quality of EQ and dynamics of the Vi console is superb as well. At any time, Ricky Wilson [vocals] can pick up any of the three different vocal microphones at his disposal and I have to maintain the intelligibility and consistency when he climbs up in the front of the PA or wherever he runs around.”

“I am grateful to be mixing on a Soundcraft board and continue to love my job, which is the most important part. With the help of Soundcraft it only gets better,” Leckie summed up.