Eleven of the most famed rock and roll musicians of recent history have teamed up for a world tour of epic proportions in 2012. Led by former Guns N’ Roses drummer Matt Sorum, The Rock N Roll Allstars recently concluded a successful run in South America. Behind his massive drum set, mic’d with a strategic array of AKG technology, Sorum conducts the Allstars through a 2.5-hour show, performing a collection of hits from each member’s respective band. 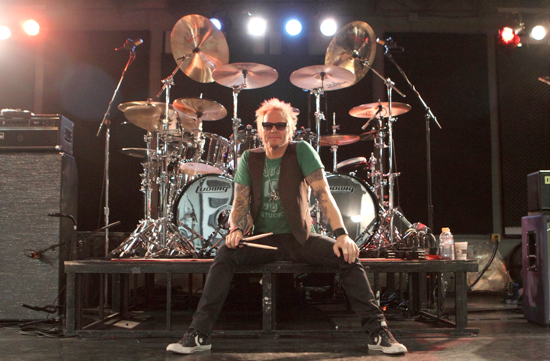 Sorum’s drum kit boasts double kick drums, five toms and a very large collection of cymbals. With such an elaborate drum set, Sorum wanted to ensure it was enjoyed visually as much as it would be for its sound. The pure epicness of the tour itself, combined with the enthusiasm of the fans, made sound a number-one factor for Sorum and the Allstars. When looking for a set of mics to capture the drums, Sorum required three factors: ease of use, durability and visual appeal for the perfect set up. AKG’s collection of microphones proved to be the perfect match.

AKG’s C518 M micro mics were Sorum’s first choice on his toms – the instrument for which he is widely known. The C518’s easily clipped on to his toms and held tight during his passionate beats. AKG D112 capsules were placed in the kickdrums, suspended in the drums themselves for a rich sound with no adverse noise. C414XLS mics were mounted for overhead cymbal pickup, while one C214 was mounted in the front of the kit for the splash cymbals and ride. Two sets of C451 stereo condensers were clipped on the set to mic the main hats as well as an x-hat set up. Sorum utilized one additional AKG D5 for backup vocals during the shows.

“I’ve had real issues with tom mics in the past, falling off or needing adjustments, but the 518’s give me a great sound and are reliable during the shows,” stated Sorum. “AKG gives my drum set a huge sound and a clean look, without the worry of fixing an ill-fitting clip. Once the D112’s are in place and the 414’s are set, we get this amazing, thick, warm, fat resonance and it couldn’t sound more natural.”

The Rock N Roll Allstars will continue their world tour in Australia and Japan in fall, 2012. The South American shows were host to more than 20,000 fans each night in the outdoor venues.

For more information about the tour, please visit http://www.rnrallstars.com/.