With the arrival of the new JBL Professional VTX V20 line array system in the UK this month, UK distributor Sound Technology Ltd hosted a listening event at LH2 Studios London on Tuesday 15th July, presented by the designer of the system, Paul Bauman.

An impressive number of leading UK rental companies and engineers were in attendance to see and hear the next generation line array which features numerous technical innovations and extraordinary attention to detail designed for touring sound and fixed installations.

Visitors were then able to listen to the system and evaluate the consistency of its coverage pattern in the huge LH2 rehearsal space.

By dropping one of the arrays people were also able to get up close to VTX V20’s acclaimed new rigging system and see its simplicity and speed. 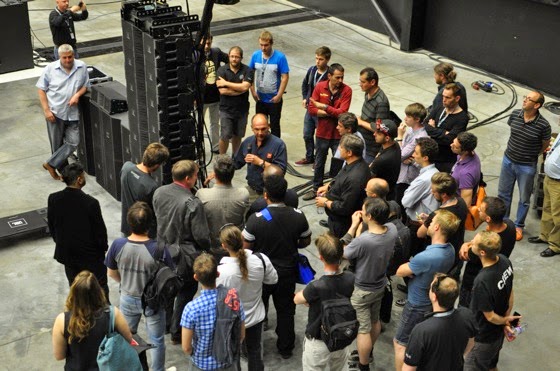 In addition the new VTX F-Series utility boxes, also featuring the D2 HF driver, were also demonstrated. A pair of VTX F12 and VTX F18 were powered by a pair of Crown iTech HD 4 x 3500 amplifiers.

Sound Technology would like to thank everyone who spared the time to come to the event at this busy time of year, and for the superb assistance provided by Harman EMEA, JBL Professional and LH2.

Further photos from the event together with additional information regarding JBL VTX V20 can be found here:

For further information please call JBL Professional UK distributor Sound Technology Ltd on 01462 480000. VTX V20 will shortly be installed in Sound Technology’s demo facility at our Letchworth Garden City head office, and throughout July can also be heard at the Kopparberg Urban Forest festival in London.

The VT4886 Subcompact Passive Three-Way
Line Array Element is designed to deliver high-quality reinforcement of music and speech in a
wide variety of applications including concert
audio and corporate A/V presentations of all
types for both portable users and fixed venue
installations.