HARMAN’s Soundcraft has announced a new option card in the ViSi Connect series of expansions for the Si Expression, Si Compact and Si Performer consoles, providing users of the console with a multi-channel, multi-format interface for live and studio recording to DAWs and other recording systems. 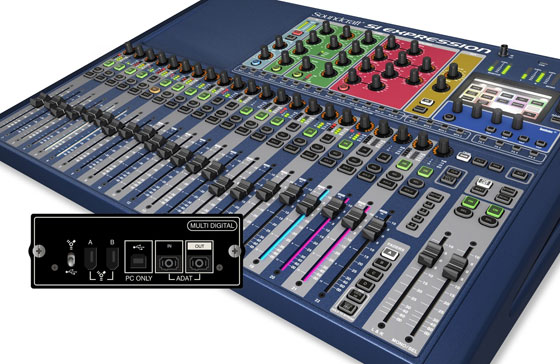 The Multi Digital card provides 32 output channels (fed from the console channel direct outputs or other feeds) and 32 input channels for playback/monitoring from the recording system, often PC or MAC based DAW’s. The card has connections for USB and FireWire, plus another eight channels of ADAT interface on TOSLINK optical connectors. A second FireWire port allows the connection of an external hard disk as well as a computer, which provides a more stable recording solution than using the computer’s internal hard drive.

The new card extends the applications for the console as live performances can now be easily recorded for later mixdown, or used for virtual soundcheck and setup using multi-track playback.

In the studio, the console can become a more powerful part of the system utilising the exemplary sound of the mic preamps for recording, providing up to six stereo latency-free artist headphone monitor feeds, control room monitor outputs and of course physical fader final mix-down.

The card also allows expansion of inputs and outputs to the console as any of the ports can be used to connect external equipment such as multichannel mic preamps or audio interfaces which have USB, FireWire or ADAT connections.

Soundcraft has developed an application note and set of simple guides which can be viewed on the Soundcraft website, www.soundcraft.com.