"Lexicon reverbs have the ability to sound like a part of the source sound, rather than a layer of reverb superimposed on top, and that makes it much easier to use reverb in a mix without eating up all the space". 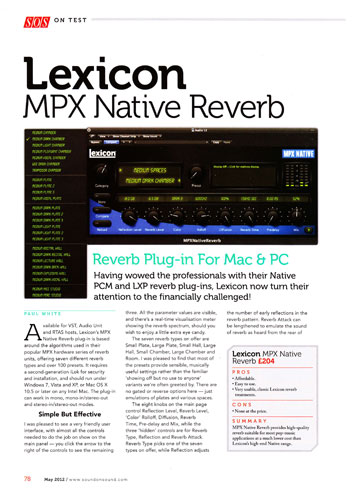 For over 40 years Lexicon® has been considered the gold standard of digital reverb and effects processing. Now that same distinctive, smooth, rich “Lexicon Sound” is available in a plug-in specifically designed to take any home or project studio to the next level. The MPX Native Reverb Plug-in delivers the legendary Lexicon sound through a single polymorphic plug-in with seven different reverb types and over one hundred of the most versatile and finely crafted studio presets. Paul White investigates...

"I was pleased to see a very user friendly user interface, with almost all the controls needed to do the job on show on the main panel".

"The seven reverb types on offer are Small Plate, Large Plate, Small Hall, Large Hall, Small Chamber, Large Chamber and Room. I was pleased to find that most of the presets provide sensible, musically useful settings rather than the familiar 'showing off but no use to anyone' variants we're often greeted by".

"There a quite a few other decent algorithmic reverbs at the price, but the MPX Native Reverb's big selling point is that it has the Lexicon sound".

The full review can be found in the May issue (Vol 27, Issue 7) of Sound On Sound magazine on sale now. The Lexicon MPX Native Reverb is also available now at £204 RRP.