EM Communications carries out full AV integration at the former ULU, Including the UK’s first installation of JBL VTX F-Series

During the golden era of touring the University of London Union (or ULU as it was then popularly known) was a favoured circuit venue for emerging bands.  With the disbandment of ULU this year (now rebranded as the ‘Student Central’) the Ents Committee, under Student Activities & Ents Manager Allan Adams, decided to bring its live space (known as ‘The Venue’) into the 21st century with a complete refurbishment. This included a new end to end Harman Professional sound reinforcement infrastructure designed by Ed Manwaring of EM Communications. 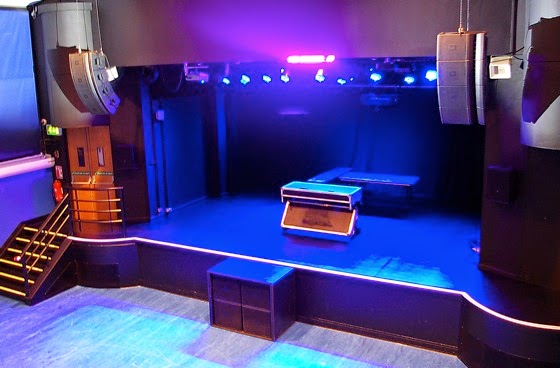 Manwaring has been servicing the Venue’s technical requirements for the past three years, and after this long-time advocate of BSS Audio’s Soundweb platform demonstrated an elegant way of enabling the Union to route either DJ or live signals to Gallery or Bar on two Soundweb BLU-100s, he was soon dismantling the 12-year old house PA system, which had reached end-of-life and specifying a JBL VRX line array and Soundcraft digital mixing platform.

This was all part of Allan Adams’ vision to get the facility back on the touring circuit, Manwaring continues. “The work involved specifying rider friendly equipment and relocating the main FOH mixing position from the seated balcony upstairs to the main dancefloor, as acoustically this was wrong.”

With blue seating and a blue linoleum floor replacing the original wooden floor, and the balcony now opening up behind a glass barrier, Manwaring set to work, specifying hangs of four JBL VRX932LA per side to provide even coverage through the main 600-capacity Venue and through the concertina doors to the annex bar/foyer area, at the rear which creates a combined capacity of 1200.

Manwaring is a strong supporter of JBL, and knows the capabilities of VRX from previous installations he has carried out. “It always delivers predictable results and is an affordable option”.

Across the front of the stage are eight VRX 918S subs, four ground stacked in the centre and two blocks of two recessed under the apron, stage left and right — all designed in a cardioid pattern.

Another masterstroke has been to specify a pair of JBL VTX F12 12in speakers on stage as front fills, which can swivel back and function as a DJ monitor at stage left when taken out of concert mode. “Since they use the award-winning D2 dual driver they sound awesome,” he says. 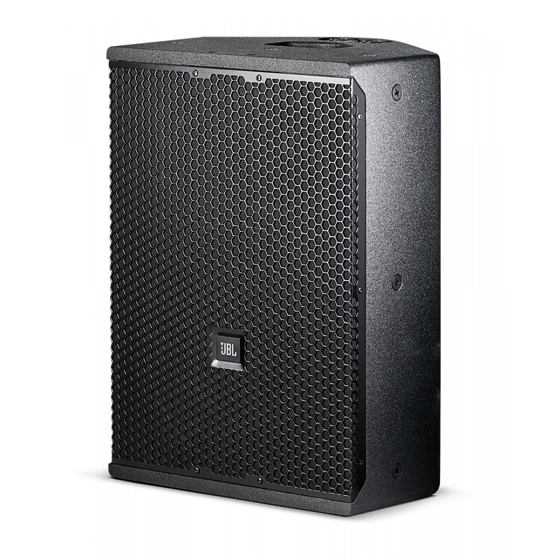 Driven by a powerful suite of Crown iTech HD amplifiers, containing BSS OmniDrive processing, the system was set up and optimized using a combination of Harman’s HiQnet Audio Architect and Smaart analysis tools.

Supporting the EM Communications design were Ben Todd and Hugo Burnard from the special projects team at Sound Technology, the UK and Eire distributors for all the Harman Professional brands.

Ed Manwaring has looked to create unique versatility and system headroom right from the start. Down at the stage he has also reconfigured Monitor World, replacing the old amp rack position so that the foldback engineer now has line of sight to the Soundcraft Vi1 at the FOH position through a newly created hatch. 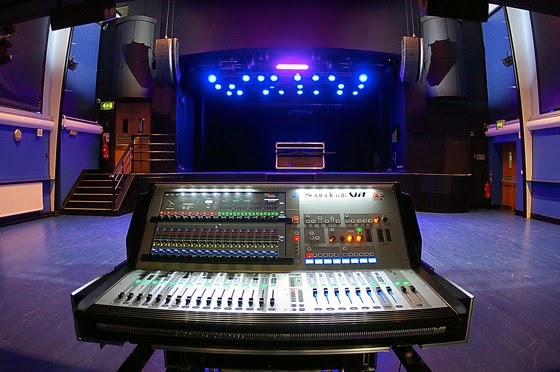 Sensibly, he has specified a hybrid Soundcraft Si Performer 3, enabling the venue to make use of the desk’s DMX universe to run the 30 channels of LED Fresnel lighting when Conference Mode is recalled.

And when used in that mode the desk will also take over FOH duties. “They can come in without an engineer, recall the scene, and control everything from their laptop.”

In fact all the different operating modes are easily accessible on presets recallable within the Soundweb environment. “The idea is to make everything just two clicks away,” he says.

The Soundcraft deployment had been a no brainer, and will soon feature the iPad option. “I have been a Soundcraft user for years. It’s rider friendly and everything is onboard. Relocating from front of house to the main auditorium we needed a small footprint desk which was easy to pack away when the room is double turned — with a band playing earlier followed by a DJ. The DJ then simply plugs into the custom panel next to the Mini Stagebox 32.”

The Vi1 itself is supplied with a MADI card, and like the Si Performer, the recording interface gives it the ability to manage live multitrack recording, and connect to the engineer’s own DAW.

Aside from functioning in live, DJ and conference mode via the drop down, crank driven screen, the room is frequently utilised as a cinema, and once again Manwaring has designed the environment to be reconfigured in the software, accessible via a simple ‘Recall Cinema’ preset. The perimeter bulkhead house lighting has been incorporated into the Si Performer and the F12s will be introduced.

The result is an inspired design in which the concepts of lighting and video are every bit as imaginative as the audio.