When St. Andrew’s C of E Church in the Gloucester village of Churchdown decided to reorientate its interior through 90° to better accommodate its growing congregation, it presented a real audio challenge for Kelly Gibson’s locally-based integration company Revolution Multimedia. And it was one he was able to meet with a Harman Professional solution. 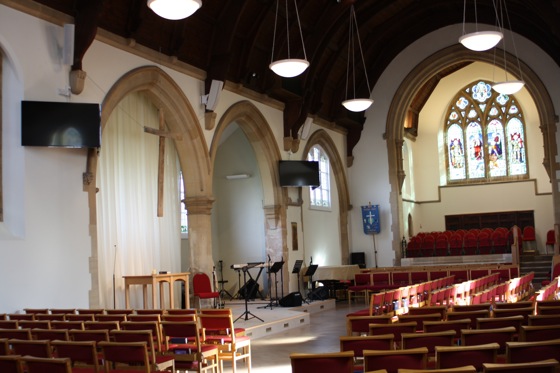 Long established in both the education and HoW sectors, he has worked with this church for many years. Despite the complexity of this latest project, and the fact that the committee had invited much larger audio companies to tender, his bid was comfortably the most competitive and he was awarded the contract.

“The church is growing at an enormous rate,” he confirmed. “The building is extremely wide, with what are almost transepts on the side, so they decided to tear out and replace the floor, using under-floor heating as part of a complete interior makeover, and turn the seating through 90°. This has given them an enlarged capacity of 360 seats instead of the former 210.

Kelly has worked with Sound Technology Ltd, the Harman Professional UK & Eire distributors, for many years — but as a one man band this is the largest project he has undertaken. Having Sound Technology’s support was a major factor in the successful implementation. “They always have good stock levels and the beauty is I can get almost everything I need from a single source.”

Sound Technology’s Project Support Team assisted with computer simulations. “With the congregation now facing the long wall we knew the speakers would need to be wide dispersion. And so Sound Technology recommended the JBL CBT70J [Constant Beamwidth Column Array], as they would be discreet, with no visible cables and brackets.

JBL CBT Constant Beamwidth Technology columns are specifically designed for difficult acoustic spaces. Unlike traditional columns, JBL CBT use a true line array design combined with patented, passive technology to produce a very narrow vertical pattern (switchable between 45 and 25 degrees) which by ensuring fewer unwanted reflections off hard surfaces such as floors and ceilings delivers exceptional intelligibility. The CBT70J model features sixteen 1" HF drivers and four 5" LF drivers delivering even projection of full-range audio across a wide and deep audience area. All this is achieved using a cost-effective and entirely passive design, without the need for complex, and expensive, digital electronics. The end result is an affordable, simple to install range of loudspeakers that deliver powerful, full-range and highly intelligible audio in even the most taxing acoustic environments.

Three CBT70J’s in white are wall mounted at intervals high up on the long wall above the vaulted windows, while the fourth column speaker is a black CBT50LA, which is concealed up in the vaults high up among the dark beams. Two floor-standing JBL ASB 6112 1000W single 12in subs provide LF extension. 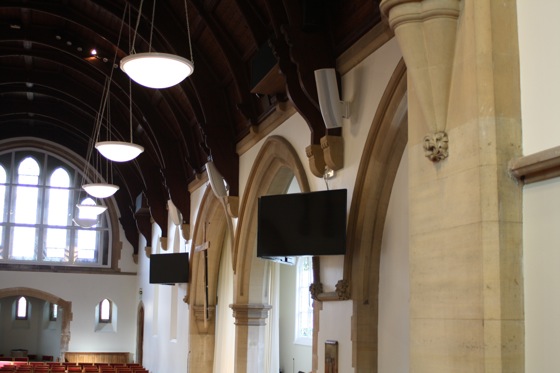 The system is matched with the Crown XTi 4002 amps (driving the tops) and XTi 2002 (for the sub bass) amps. These amps have their own built-in DSP, and accompanied by a dbx DriveRack 260 Kelly Gibson again consulted with Sound Technology’s project team to see how he could best maximise the presets, with the DriveRack providing full bandpass and crossover configurations as well as independent output processing. Like everything else, the set-up is intuitive and the church was immediately impressed with the configurability of this loudspeaker management system.

The seating has been covered in cloth, providing a deadening effect to the room’s inherent reflections, and Kelly is able to run the system with very little EQ. “You can tune these speakers for either voice or music — and I opted for ‘music’ ”, he said.

“The feedback from the church has been fantastic — their jaws dropped when they heard it for the first time; it’s so much better than the old system they had in before and the music can be heard a lot more clearly.”

To mix the mics and any line inputs the church itself opted for a Soundcraft Si Compact 24 digital mixer, which combines all the benefits of digital with an intuitive analogue feel. “The musicians play in different band configurations so this enables them to save a scene and then recall it,” says Kelly. “They also like the fact that it can be password protected and particular profiles set up for designated users.

The conversion has been a complete success, enabling St. Andrew’s to be able to add a further 150 seats.