Oswestry-based Richard King Systems have fitted many churches over the years using either JBL AE or CBT solutions and have generally led the charge to educate churches into the higher quality sound that is now available. 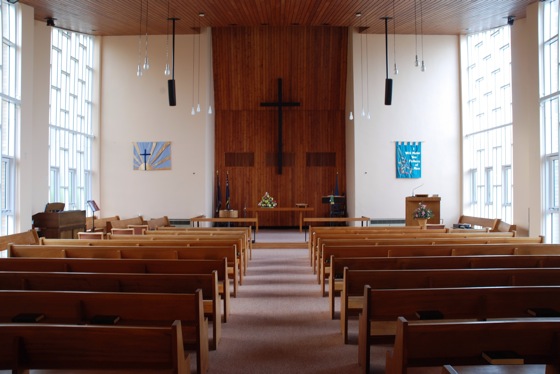 “Historically churches haven’t spent a lot of money on their sound systems and that’s unfortunate,” says project manager Richard Hughes. Recently the company even set up a democracy, putting the choice between two premium JBL systems to a referendum, and allowing the congregation at The Heath Methodist Church in Runcorn to vote on their preferred new sound system.

Said Hughes, “Initially we started out using AKG mics but realised it made more sense to be able to go to one source for all our equipment. Sound Technology are far more than just wholesalers … they have a wealth of expertise and recommend what is best fit for purpose. They are keen to build relationships and are always there to back us up.”

Richard King Systems certainly benefitted from this knowledge when confronted with this modern 42 year old church, with heavily sloping ceiling — measuring 2.5 metres floor to ceiling at the rear and 10 metres at the front.

The company had previously carried out work in the adjacent thriving church hall. “But we knew the sound system in the church was poor and had been problematic since it was first installed. They were receiving many complaints about poor intelligibility and last year the committee decided it was time to call us in,” states Richard Hughes. “As for the room itself the acoustics are awful — it’s an extremely live room and the delay times were long.”

Richard King’s own ISCE trained engineers met with a member of Sound Technology’s project team on site, and after much deliberation the integrators decided the CBT70J best met the criteria, and at the same time would not intrude on the aesthetics. They decided to suspend a pair several metres in from the outside walls to avoid contact with the existing downlighters. According to Richard Hughes, “These are the speakers that best maximise the performance and provide an evenness of sound inside the defined listening area.” Mounted on the CBT brackets, they are fixed to special tubes that protrude through the timber ceiling. 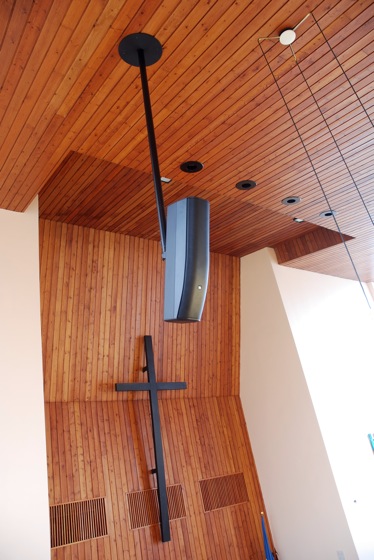 JBL CBT Constant Beamwidth Technology columns are specifically designed for difficult acoustic spaces. Unlike traditional columns, JBL CBT use a true line array design combined with patented, passive technology to produce a very narrow vertical pattern (switchable between 45 and 25 degrees) which by ensuring fewer unwanted reflections off hard surfaces such as floors and ceilings delivers exceptional intelligibility. The CBT70J model features sixteen 1" HF drivers and four 5" LF drivers delivering even projection of full-range audio across a wide and deep audience area. All this is achieved using a cost-effective and entirely passive design, without the need for complex, and expensive, digital electronics.

The end result is an affordable, simple to install range of loudspeakers that deliver powerful, full-range and highly intelligible audio in even the most taxing acoustic environments.

In addition two tiny JBL Control 52 satellite speakers have been concealed in the choir stalls — a solution much favoured by church integrators. The CBT70J’s are driven by a Crown XLS 1500 amplifier while one channel of an XLS 1000 drives the tiny satellites and the other a pre-existing system in the vestry, which also acts as an overspill.

At the same time Richard King Systems installed three AKG GN 50 ESP gooseneck mics fitted with CK31 cardioid heads — one in the pulpit area and two on floor stands in the communal area. These were chosen for their flexibility. They also installed an AKG WMS45 Perception UHF wireless Presenter Set.

For mic mixing the company specified a Soundcraft EPM8 8-channel mixer (a popular platform which they have used many times). Explaining the decision, Richard Hughes said, “The church opted for that themselves; they run an EFX12 in the hall and are very happy with Soundcraft.”

EQ presets are contained in a dbx ZonePro 641 — configured for the left and right hangs, with the third zone assigned to the Control 52’s and zone 4 to the audio loop which was already installed. “This enabled us to make all the tonal adjustments and we can set thresholds, giving the customer level control.”

The system certainly received the popular vote from the congregation — who were asked to compare the sound quality with a temporary system (comprising a CBT50LA line arrays, with a pair of JBL Control 23’s acting as delays). These were A/B switched via a dbx remote ZonePro ZC1. “We ran this over two Sunday services as we had no idea what perception the congregation would have, and we invited a show of hands.” And the decision went in favour of the striking J-shaped CBT70-J.

Richard Hughes says he is delighted with the difference the new installation has made, and so is the client. “As one member of the committee said, “I can now hear every word the clergy are saying, and any reservations I may have had about the physical intrusion of the speakers have just melted away.”