The University of Exeter's stunning new multi-million pound Forum project has transformed the heart of the Streatham Campus and provided it with a vibrant new centrepiece. 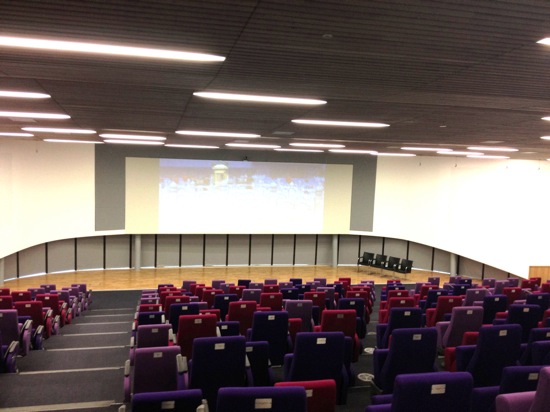 Officially opened by Her Majesty The Queen, the inspirational mix of outside and inside space includes an Auditorium, two technology-rich Exploration Labs, a Multimedia Room, featuring three fully specific editing stations with 60-inch preview monitoring, Seminar Training Room and the Seminar Block and Group Study Room — as well as a new Student Services Centre, refurbished library, retail and catering outlets.

Sir Robert Mcalpine, main contractor to the University of Exeter, commissioned GV Multi-media Ltd with the challenging task of providing and integrating the vast AV system in the Forum. Working to tight timescales (since the opening needed to form part of the Queen's Diamond Jubilee celebrations), and to a specification put together by consultants Buro Happold, the jewel in the crown is the 404-seat Alumni Auditorium, featuring high quality projection and audio systems.

For this they were helped in no small part by the Harman Professional tools provided by UK and Eire distributors, Sound Technology Ltd. These included products from the Crown, dbx and JBL cinema portfolio, constructed around a BSS Soundweb digital network.

Designed for ultimate flexibility of content, including musical presentations and cinema-quality screening of films, the Alumni Auditorium benefits from a fully-integrated industry-standard specification, including HD widescreen projection, IPTV streaming and videoconferencing — all operating under Crestron control.

All audio within the Auditorium is transported through CobraNet protocol devices – including BSS Soundweb DSP and streamed to appropriate areas via a pair of high-performance Ethernet switches installed in a separate remote amplifier rack.

The JBL speaker set up is impressive in terms of functionality as well as its aesthetics. The suite features Crown CTs-powered JBL ScreenArray cinema range cabinets, housed flush to the screen, to accommodate the left, right and centre channels — and an ARS (Assisted Reverb System) as part of a 7.1 surround system. 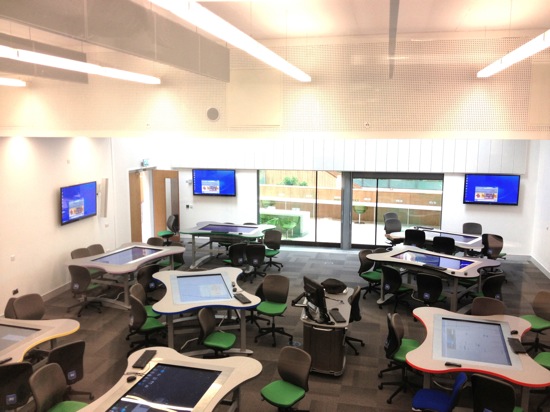 In the Exploration Labs' Group Study room, complete with ten 60-inch wall-mounted flat panel displays, the in-room audio is provided by four further JBL CBT 100LA's – one in each corner of the room.

Helping to realise the university's vision were GV's National Technical Manager, Daniel Victory, and Divisional Director, Richard Watts. According to the former, JBL's ‘next generation' ScreenArray loudspeaker system was implemented to satisfy the varied needs of the flexible space, including musical performances from solo singers to orchestral pieces to operatics — as well as day-to-day presentations and cinema surround applications. “The JBL ScreenArray series offers the fidelity and high performance necessary for all of these applications, with the audio carefully controlled, routed, equalised, crossed-over and limited by the powerful Soundweb London DSP,” Daniel explained.

The Soundweb network itself is built around a pair of BLU-800s, offering a total of 24in x 12out with a combination of standard and AEC input cards, for the routing and processing, an 8-input BLU-32 in the lectern for source audio and lectern microphone with phantom power, a 4U mobile stagebox comprising a BLU-320 (16in) and BLU-BOB2 breakout (offering an additional eight outputs) with XLR patch-rail; this was connected using the highly cost-effective BSS BLU-Link fault tolerant buss to minimise the CobraNet requirement.

A BLU-32 (12-out) in the amplifier rack drives the stack of three CTs 600, two CTs 1200 and two CTs 2000 power amplifiers while a further BLU-32 is used in conjunction with the artificial reverberation system.

All of the inter-system audio is run via Cobranet and through the implementation of this within the DSP construct allows routing and rerouting of the audio around the system, with one-button control on the Crestron system allowing the users to switch from performance to lecture to cinema modes in a matter of seconds.

In summary, Daniel Victory believes that the design of the technology architecture had created an extremely elegant solution. “The BSS Soundweb worked extremely well with the CTs amplifiers and JBL ScreenArray. Using the Soundweb BLU-800s we were able to quickly set up and tweak the crossover settings for each individual speaker channel for the tri-amplified arrays and subwoofers. Once configured, each output was then set up with level limiting to prevent user error from damaging the loudspeakers and to keep the sound levels within safe audible limits.”

The overall performance of the Auditorium, he says, has continued to surprise and please everyone that has used the room since the inauguration concert. “We are extremely proud of what we have achieved at The Forum creating at the heart of the University a hub of AV technology,” he said.