Soundcraft® Si Performer Brings the Best out of Delilah

Having become synonymous with The Noisettes in recent years as their long-term FOH engineer and production manager, this summer Bryony October took to the road with British singer songwriter (and Chase & Status collaborator), Delilah. In so doing she became an early adopter of the new HARMAN Soundcraft Si Performer digital console—which not only builds on the successful Si platform but is the first desk to incorporate a DMX lighting interface. 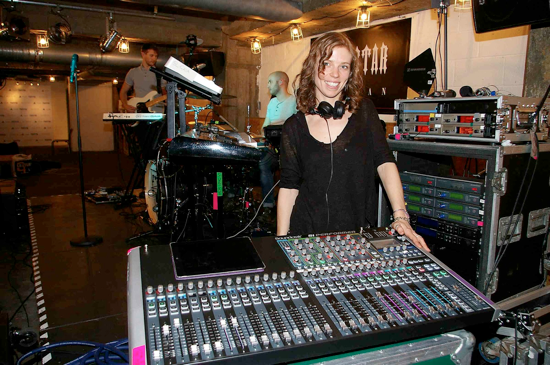 Bryony knew she would need a minimum of 31 inputs and that she would also be mixing the 5-piece band’s monitor in-ears from front of house. But her chosen console also needed to be compacted into a small footprint in order to fit into a splitter van (along with IEM rack and mics).

Knowing that this tour would not warrant full production support October had earlier contacted Soundcraft to see if they had any new consoles in prospect. “The timing couldn't have been better as the Si Performer was just being released,” she said.

With something of a history of mixing female vocal-led pop October quickly discovered that having worked the Soundcraft magic so successfully with Noisettes’ lead singer Shingai Shoniwa on a Vi1, the Performer also ticked all the boxes on her wish list.

Offered the role by tour manager Tim Boardman she went straight into production rehearsals and was soon mixing Delilah’s soulful voice and 5-piece band with no induction necessary.

As for features, the Si Performer’s FaderGlow and colour backlit name displays on every channel proved a godsend. “It has screens on each channel, so you can see the compressors and gates, and the FaderGlow changes colour so you never make a mistake when moving from FOH to monitor mixes,” October said. “It also turns the system EQ red so you can clearly see the graphic.”

“The touch screen is easy to get around quickly, with the one-touch easy mix with buttons across the top of the faders,” October added. “Finally I love the magnetic iPad notes pad which is very handy.”

The entire show mix is placed on the desk’s top layer, with October sub-mixing the drums to a group buss and also Delilah’s vocals and some of the drums to the Lexicon effects.

As for Delilah’s personal monitor mix, she said, “It’s all about the vocal level, reverbs [the desk contains four stereo Lexicon effects engines] and a low mix of everything else. It’s about creating an open and ambient sound so that the artist feels part of the show and can interact with the audience.”

Sonically, she believes, the desk could scarcely be improved—and although October has not had the opportunity to use the DMX interface, the sound engineer notes that “every single venue I arrived at knew that this was the desk with DMX.”

Summing up, October stated, “The Si Performer has been a pleasure to work on. It is an easy desk to navigate and has enabled me to deliver the five monitor mixes and house sound with ease.” She confirms that she would have no hesitation specifying this as her go-to console on any upcoming club venue splitter tour.

"Flexible, innovative and stylish, you get pristine Austrian sound and build quality, accessories and a case ā€“ all…

Building on the phenomenal success of the Fusion stereo analogue processor and the SiX SuperAnalogueā„¢ console,…

You can use this tool to change your cookie settings. Otherwise, weā€™ll assume youā€™re OK to continue.