It is a little over three years since HARMAN’s Studer announced that it had won a major contract from the BBC to deliver in the region of 85 OnAir 3000 digital audio mixing consoles to its flagship locations at MediaCityUK, in the north of England, and the second phase of the rebuilding of the London HQ to create the new W1 Centre. 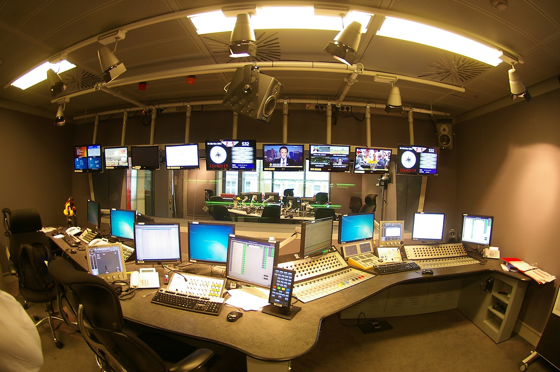 The latter is now home for all the BBC's national radio networks, as well as a focus for the BBC's national and international news operations, bringing the World Service and the domestic news service together in one venue for the first time.

The transformation of the London HQ includes the creation of 140 acoustic spaces for Radio & Music, News and World Service in the new 10-storey-high West One Phase 2. Three years on, and all facilities have been equipped with different Studer OnAir 3000 frames—with control surfaces ranging from 6-fader for simple self-operated broadcasts up to the largest 36-fader General Purpose studios—with many customised for specific needs.

The OnAir3000s—all modulo types, mounted into desks and using standard faders—have been supplied with a mix of SCore and SCore Live racks.

Nearly 30 of the OnAir 3000s have been installed at the new MediaCityUK broadcast centre in Manchester, for the Corporation's domestic radio services, such as BBC 5 Live, where the first 40-fader desks were installed.

The new West One Phase 2 facility, which is home to over 5,000 personnel, offers splendid views over the London skyline, and equally impressive views of the vast open plan double-atrium newsroom, home to 450 staff alone, from the ground floor gallery.

In London, the OnAir 3000s have mainly been deployed in GP and self-op studios. A typical layout for a GP studio control room would include the OnAir 3000, VCS dira playout system, BNCS (Broadcast Network Control System) and Delec talkback, with outside sources locally integrated by the Studer console. Since the OnAir 3000 sits downstream from the Delec this can also provide back-up talkback in the event of failure. The facility also contains a Broadcast Bionics PhoneBox system for handling on-air telephone calls and IDS (Intelligent Display System) for displaying clocks and signal lights and controlling TVs and video monitors.

Adjacent to a number of studios are ten journalists’ kiosks known as Voice Points, using OnAir 3000 modules linked to the main studio control desk. Each is equipped with a Studer Editor Module — an extended three-fader module including a subset of monitoring and talkback functionality and buttons for the assignment. Each one has access to a Codec, ISDN, VCS dira! machine, etc.

John Sullivan was the BBC’s lead project manager on both Salford and New Broadcasting House. He explained that the original vision of the project team was to make everything identical, for ease of implementation and consistent workflow, but it was understood that there would need to be variation across different areas and operating divisions. Having an OnAir 3000 desk in every facility, albeit configured differently, does allow a studio manager or less technical operator to have familiarity wherever they are and make the desk work in seconds.

The audio integration of a total of 80 studios at West One Phase 2 and BBC North was carried out by IPE who bid successfully for the contract under an EU competitive tender process.

As for any large scale BBC project, the in-house team and user divisions wrote a stringent specification against which suppliers were to tender. For example, the number of clean feeds supported and extent of configurability were key, both of which were very BBC specific given the range of studios and workflows the consoles were required to support. There were other requirements, particular to the BBC, that had to be accommodated either ‘out of the box’ or by changes to the console software.

Other criteria included the requisite number of channels, the amount of processing power available, scalability and whether the same desk type could be used in different locations. Price was, of course, a consideration as the BBC must be able to demonstrate the best value for money for the licence payers.

Finally, in the self-op studios (such as World Service, where AKG C414 microphones are also deployed) the console needed to permit over-control from an adjacent studio, which the OnAir 3000 desks were able to simply achieve with MADI links between two DSP cores.

The project team learned a lot during the initial deployment in Salford. The teams knew that if they could make Radio Five Live’s big GP studios work, within the short time frame available, then the studios would be able to meet all the requirements for the West 1 workflows. In fact, the two 40-fader OnAir 3000 desks utilised in Salford are the largest available OnAir 3000 format.

With the BBC’s specialist project manager, Andy Laughton, providing the liaison between Studer and IPE, factory testing was carried out on site, along with acceptance testing and operational proving, in time for the MediaCityUK studios to go live in September 2011, while down in London World Service went live in January 2012.

Since then there have been other high profile transitions, most notably the major migration of the popular Radio 1, from Yalding House to the 8th floor at Broadcasting House. Here guest DJs are equipped with a full CDJ rig and turntables, while a Soundcraft Ghost has been provided for mixing visiting bands performing in the Radio 1 Live Lounge.

All Studer consoles were configured on site and issues concerning workflow resolved during the BBC’s operational proving phase.