Located at Memphis International Airport, the FedEx Express World Hub is the largest and oldest facility in the FedEx Express network, capable of sorting more than 1.5 million packages every day. This “super hub” is so big that it takes up approximately 832 acres—and a recent addition to the package sort facility covers 100,000 square feet of ground and is three levels high. When Memphis systems integrator Technical Support Systems (TSS) got the call to install the new building’s paging and life safety sound system, the company opted for the new HARMAN’s JBL AWC82 full-range all-weather loudspeaker. 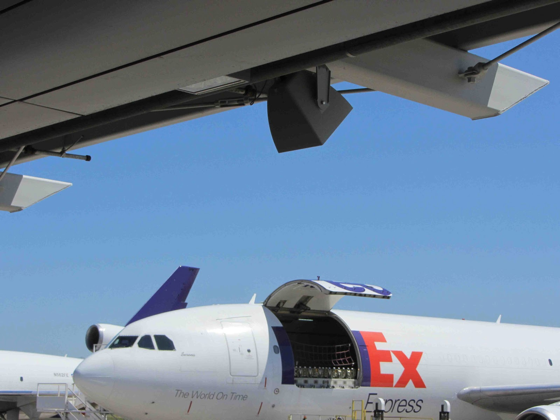 Aside from the sheer size of the project, the main challenge TSS faced was that the paging system had to be heard over a noisy environment. It had to overcome an 85dB ambient noise floor in an echo-prone metal building with airplanes and trucks coming in and out, conveyors going all the time and 24-hour a day activity. The system would have to be intelligible at levels over 100dB.

In addition, FedEx management wanted to step up their audio system life safety standards and performance. “The area has had a rash of tornadoes recently and people are more aware of the importance of life safety systems than ever before,” noted Chip Benson of TSS. “Those old-style metal paging horns weren’t going to cut it.”

Benson knew that JBL had recently introduced the AWC82 and that on paper it looked like the ideal solution for its high volume capability, wide coverage pattern and full-range sound. “I had never heard the speaker, but design-wise it looked like exactly what was needed, so I trusted my gut and JBL’s reputation and went with it,” he said. “We were the first to ever take delivery of the AWC82, and delivery was tight—we needed those speakers immediately and they arrived on time.”

TSS installed a total of 100 AWC82 loudspeakers—24 on each of the three levels inside the sort facility and the rest on the outside of the building covering the Hub ramp where the planes arrive. Because of the JBL AWC82’s wide 120-degree coverage pattern, Benson was able to use fewer speakers spaced farther apart compared to previous installations. In addition, Benson and crew hung 20 JBL Control™ 65 P/T pendant speakers in the electrical, mechanical and maintenance shops and installed 40 JBL Control 24CT in-ceiling speakers in a number of offices. The speakers are powered by 13 Crown CTs 2000 amplifiers located in a rack in the head-end in the building’s phone data room.

The speakers and amps are on a 70-volt distributed audio system divided into five zones: sort facility, outside, offices, hub all-call and as Benson calls it, a “bat phone” emergency override. The audio system is tied into the FedEx World Hub’s VoIP phone and paging system, which is linked to all FedEx Hub locations in Memphis. The emergency paging system is connected to FedEx’s meteorology and security departments, which has priority in the event of an emergency.

Another reason the speakers had to deliver better performance is because the paging system is part of the VoIP network. VoIP provides better bandwidth and fidelity than older analog systems and TSS needed speakers that would complement the improved audio quality.

Benson’s gambit in choosing the JBL AWC82 paid off. “Of course, part of me was reluctant to go with the JBLs sight unseen. However, when we first turned on the system we wanted to test their ability to play full-range so we played loud rock music through them. The AWC82 blew away our expectations. In fact, these speakers could be used for foreground fill at a rock concert and I would have no qualms about using them that way.” 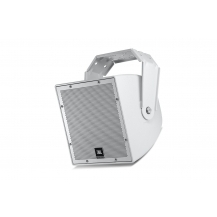 ‘Designed for semi-pro and domestic users, the AKG371 ‘phones are a smash hit.’The latest issue of Hi-Fi…