Adlib has made a major commitment to Soundcraft digital control, following up their purchase of three new Vi6 consoles earlier this summer by placing a further order with UK/Eire distributors Sound Technology Ltd for four of the groundbreaking new Si Performer digital consoles at this year's PLASA Show. 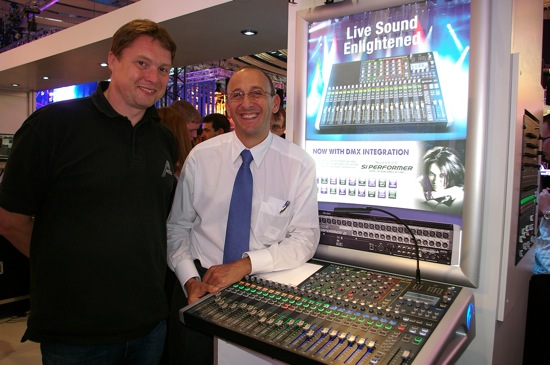 Launched at the PLASA Show, the Si Performer is a full-featured compact audio console featuring up to 80 inputs to mix and are the first audio consoles to incorporate DMX lighting control – ideal for single-operator applications.

“Si Performer 3 can be used as a monitor desk to work alongside our Soundcraft Vi consoles and the Performer 2 will be popular in the corporate world as a FOH desk. We have CAT5 cards and already own Vi standard and Compact stage boxes with which they are compatible, so it gives us a lot of options.”

Dave Kay also commends the ease with which the operational channels can be viewed and predicts a big future for the Si Performers in the installation sector. An open day will be held later this month at Adlib in conjunction with a lighting company to show off the lighting control attributes if the desk.

At the same time Adlib has taken its stock of Soundcraft Vi desks into double figures after purchasing three new Vi6s. Originally destined as part of rental stock rotation they have gone straight out to service the fast growing live venue portfolio of VMS Live, run by Richard Maides and Steve Forster.

Having taken over the management of the Manchester Academy Maides specified the Vi6, which has gone into long-term rental at the main 2,400-capacity room, while the operators have purchased a complete sound system, including a Vi6, for the smaller 900-capacity MDH (Academy 2).

The third desk will be used for rental stock and at the new 3,100-capacity Birmingham Ballroom (originally the popular Hummingbird) which is also operated by VMS Live.

Confirmed Dave Kay, “As a result of this, Adlib is now up to four Vi1 and seven Vi6 consoles, and with the need to rotate stock we will probably be in the market for more of these.” Ultravox and Jason Mraz are among tours in line to use Vi6s this Autumn.

The Adlib HARMAN product open day, including hands on sessions with Soundcraft Vi and Si Performer consoles, takes place on 26th/27th September 2012 at Adlib in Liverpool.