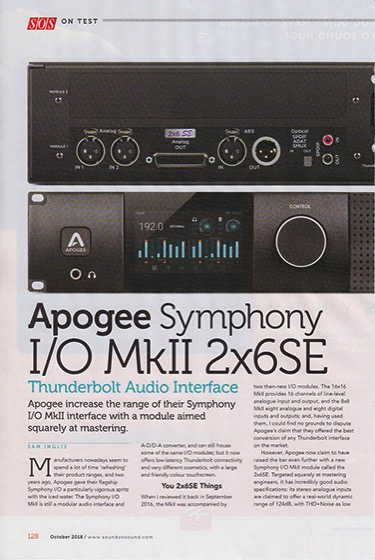 Apogee's Symphony I/O Mk II 2×6 Special Edition offers the highest quality AD/DA conversion of the Symphony series. Designed specifically for mastering engineers whose critical work demands ultimate sonic performance, it is reviewed by Sound On Sound in the latest issue of the magazine.

"When I reviewed it back in September 2016, the MkII was accompanied by two then-new I/O modules...and, having used them, I could find no grounds to dispute Apogee's claim that they offered the best conversion of any Thunderbolt interface on the market. However, Apogee now claim to have raised the bar even further with a new Symphony 1/0 MkII module called the 2x6SE. Targeted squarely at mastering engineers, it has incredibly good audio specifications..."

"...both of us were impressed by the 2x6SE. Its presentation of audio through Eric's system was not identical to that of the Esoteric D-02, but it was very good in its own right, and undoubtedly of 'mastering grade', whatever that means. In light of the enormous price difference between the two, the subjective performance of the Apogee was excellent, especially when you consider that D-A conversion is only one aspect of the Symphony I/O's multi-faceted skill set."

"In a world where more and more mix engineers are switching to all-digital 'in the box' operation, mastering remains the last hold-out of high-end analogue. The 2x6SE offers sufficient features and I/O to cater for most typical analogue mastering setups, and implements them without any compromise on quality."

The full review can be found in the October 2018 issue of Sound On Sound magazine or by clicking here.  The Apogee Symphony I/O MkII 2x6SE is available as a complete Thunderbolt or Pro Tools HD system priced at £2669 RRP inc VAT or as an expansion module for existing Symphony systems priced at £1699 RRP inc VAT.

Apogee is distributed in the UK/ROI by Sound Technology Ltd. For more information please call 01462 480000 or visit www.soundtech.co.uk/apogee.

Apogee Symphony I/O Mk II 2×6 Special Edition offers the highest quality AD/DA conversion of the Symphony series. Designed specifically for mastering engineers whose critical work demands ultimate sonic performance, 2×6 SE takes advantage of the latest advancements in digital and analog audio technology to offer inputs with 124 dB (A) of dynamic range, THD+N of -116dB and outputs with 131dB (A) dynamic range and an astonishingly low THD+N of -118dB. We dare you to compare these specifications to our competitors – 2×6 SE’s combined specs outperform just about any AD/DA converter…