"With a superbly clear balance of frequencies, light weight and extra practicality for pro use these are our choice for extended studio work". 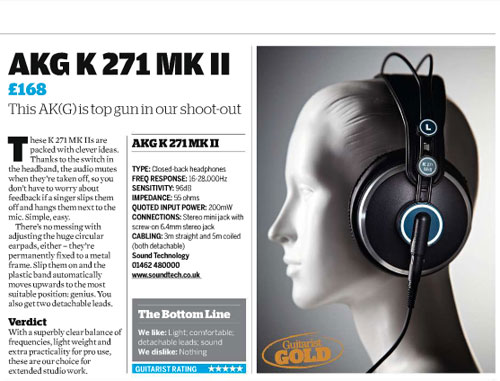 The latest issue of Guitarist magazine includes a feature on "What you need to know about...headphones". The AKG K271 MK IIs win in a round-up of 6 of the most popular headphone brands and are awarded a 5 out of 5 rating plus the magazine's 'Guitarist Gold' award.

"These K271 MK IIs are packed with clever ideas. Thanks to the switch in the headband, the audio mutes when they're taken off, so you don't have to worry about feedback if a singer slips them off and hangs them next to the mic. Simple, easy".

There's no messing with adjusting the huge circular earpads either - they're permanently fixed to a metal frame. Slip them on and the plastic band automatically moves upwards to the most suitable position: genius".

The full feature can be found in the October issue (360) of Guitarist magazine on sale now. The AKG K271 MK II headphones are also available now at £168 RRP.