“The D7 is the best vocal mic in the AKG range and performs entirely to spec. They deliver the vocal exactly as I want to hear it and have so far been great. They sound just like a condenser even though they are not.”

After five decades as a leading live sound engineer Colin Norfield’s roster of acts reads like a who’s who of touring giants.

In 1994 he piloted the sound mix for Pink Floyd’s landmark Divisional Bell tour, and his relationship with band front-man, David Gilmour has endured right up to the five recent performances at the Royal Albert Hall to promote his new album, Rattle That Lock.

Over the years, Colin has become increasingly discerning with his equipment selection, and for the first time on these shows, he introduced the artist to AKG’s D7 dynamic mic. This had originally been brought to his attention by the Austrian company’s Artist & Key Customer Relations Manager, Walter Rührig, with whom he has enjoyed a long relationship.

The D7 was designed to blend the subtle and open sound of a condenser capsule with the powerful resonance of a dynamic microphone. The patented dual-layer Varimotion diaphragm can vibrate unhindered, which results in an extremely crisp and clean sound, while the D7 can also boast outstanding high gain before feedback.

“Colin and I spoke again before this tour, and I suggested he give the D7 another try,” says the AKG man. The mic was submitted for initial tests several months before full production rehearsals started, and Colin Norfield promptly adopted it, at the same time ensuring that the six backing vocalists were also equipped with the D7.

Explaining his reasons behind the decision, Colin Norfield explains, “It’s a problem to get a big punchy sound in The Albert Hall due to its notoriously difficult acoustics. I needed something that would deliver a clean, robust all round sound.

“Having used the AKG D7 on other artists I have found it to be a good all round microphone, which doesn’t let much in from outside. I know of other artists who have literally screamed into the D7 — with no evidence of distortion.”

And with no endorsement agreement in place, Colin Norfield was free to select the product best fit for purpose. “I have always been interested in trying other microphones. Although various artist endorsements have prevented me from using AKG vocal mics on other tours, David was happy to leave the selection to me.”

Summing up he says, “The D7 is the best vocal mic in the AKG range and performs entirely to spec. They deliver the vocal exactly as I want to hear it and have so far been great. They sound just like a condenser even though they are not.” 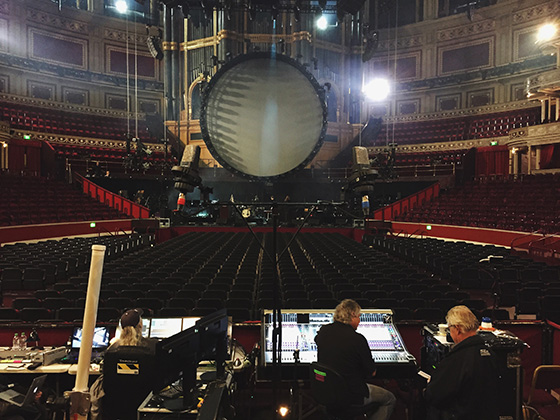 Photo above: Colin Norfield’s view of the Royal Albert Hall (with additional AKG C414 audience mics in the foreground)

AKG products are distributed in the UK and Ireland, as part of the Harman Professional portfolio, by Sound Technology Ltd. For more information please call 01462 480000 or visit www.soundtech.co.uk/professional-audio

"If you need a microphone and headphone combo, this is a fine place to start looking and the AKG comes enthusiastically…

The D7 reference dynamic vocal microphone creates the subtle and open sound of a condenser capsule with the powerful resonance of a dynamic microphone. The patented dual-layer Varimotion diaphragm can vibrate unhindered, which results in an extraordinarily crisp and clean sound. The unique laminated material damps high resonance peaks in the frequency response, which in combination with the tight, supercardioid polar pattern enables the D7's outstanding high gain before feedback.…