“If the D12VR is a serious sound-sculpting tool then the D40 has been built to capture an instrument in the sonic equivalent of a war zone”. 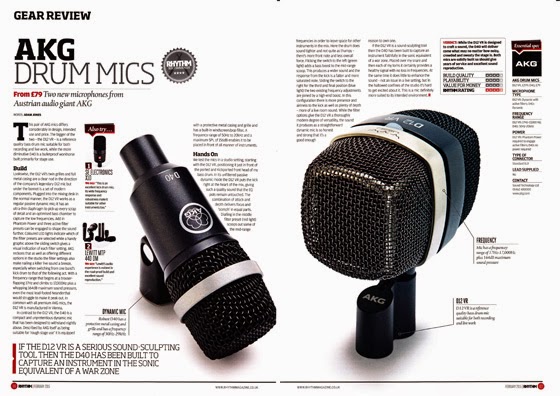 Two AKG microphones are reviewed in Rhythm magazine this month - the D40 dynamic instrument microphone and the the D12VR reference large-diaphragm dynamic microphone.  Both receive the magazine’s ‘Recommends’ award.

“In its unfiltered passive dynamic mode the D12VR puts the kick right at the heart of the mix, giving such a quality sound that the EQ pots remained untouched.  The combination of attack and depth delivers focus and ‘oomph’ in equal parts”.

“While the filter options give the D12VR a throughway modern degree of versatility, the sound it produces as a straightforward dynamic mic is so honest that its a good enough reason to own one”.

“…the D40 is a compact and unpretentious dynamic mic that has been designed to withstand nightly abuse.  Placed over my snare and then each of my toms it certainly provides a healthy signal with no loss in frequencies”.

The full review can be found in the February 2015 issue of Rhythm magazine on sale now.  The AKG D40 and D12VR are also available now at £79 and £299 RRP inc VAT respectively.

"If you’re thinking of buying a great-sounding comfortable pair of headphones for listening to your music at home,…

"Refined, beautifully made and designed with attention to every last detail, this is the Rolls Royce of MIDI control…

A new range of JBL bags, covers and backpacks are now available in the UKJBL Professional by HARMAN and…

The D12 VR is a reference large-diaphragm dynamic microphone with cardioid polar pattern. Designed specifically for kick-drum recording applications, the microphone has a thin diaphragm to enhance the low frequency performance. Its warm sound is realized by the original C414 transformer, especially impressive at high signal levels. …

The D40 professional instrumental microphone with its solid all-metal body will stand up to the hardships of night-after-night onstage use ?with a smile.? Its patented Varimotion diaphragm uses a unique laminated material to damp high resonance peaks, leading to a quantum leap in audio performance. The transducer is protected by a sturdy wire-mesh cap and can take extremely high sound pressure levels with ease.…