"The P0-32 is a fun and inspiring noise-maker and the added MicroTonic compatibility broadens its sonic scope considerably." 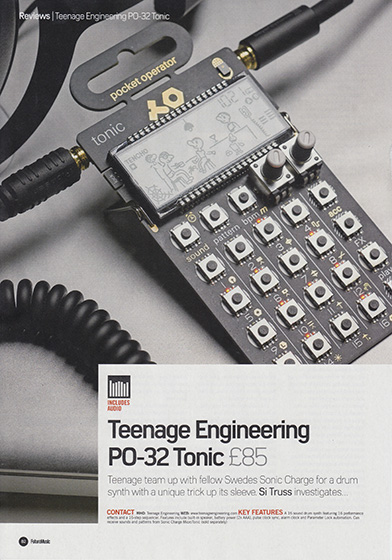 The Teenage Engineering PO-32 tonic is the first pocket operator which allows unlimited sounds. In addition to the 16 preset sounds, you can use Sonic Charge Microtonic VST to craft your own unique sounds and transfer them wirelessly to PO-32 with the built-in microphone, or alternatively by using a cable.  It is reviewed in the new issue of Future Music magazine.

"MicroTonic remains a quality drum synth, and its capabilities have been put to good use in stocking the P0-32 with factory sounds. The 16 sounds span bass-heavy kicks, fizzy white-noise hats, crunch snares and plenty of more esoteric, synthesised percussive sounds."

"As is true of all the POs, the performance effects are the real star of the show here. The effects themselves cover rhythmic filtering, delayed fade outs, lo-fi and distortion effects, beat repeats and more. They're a lot of fun to play around with and are capable of quickly conjuring up glitchy, stuttering sounds akin to classic '90s IDM."

“...the P0-32 sounds great and, even if just as an inspirational source to sample, loop and churn out toplines, at £85 it's worth the price of admission."

The full review can be found in the May issue of Future Music magazine on sale now.  The Teenage Engineering PO-32 tonic pocket operator is available this month priced at £85 RRP inc VAT.

Teenage Engineering is distributed in the UK and ROI by Sound Technology Ltd.  For more information please call 01462 480000 or visit www.soundtech.co.uk/teenageengineering.