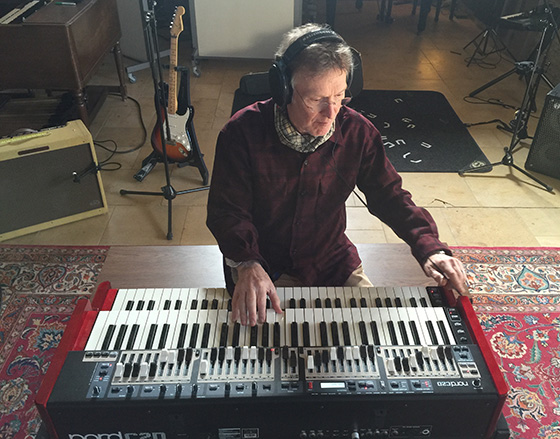 For more than five decades, Steve Winwood has remained a primary figure in rock ‘n’ roll, a respected innovator who has helped to create some of the genre’s most celebrated achievements.  Winwood burst into prominence in 1963 with the Spencer Davis Group and since that time his celebrated skills as a composer, vocalist, and multi-instrumentalist have developed an impressive catalogue of popular music.

After leaving the Spencer Davis Group in 1967, Steve went on to co-found Traffic, widely considered by many to be one of the most important British groups of the 1960’s and 1970’s, and in 1969 formed the band Blind Faith with Eric Clapton and Ginger Baker.  Since 1977 Steve has enjoyed an extremely successful solo career yielding hits such as “Back In The High Life,” “When You See A Chance,” “Valerie,” and “Higher Love”.

Winwood continues to perform throughout the world and record new music, furthering his impressive legacy.  In addition to his many achievements as a solo artist, Winwood remains in high demand for special collaborations with other artists.   His distinctive Hammond organ has graced such classic fare as Jimi’s Hendrix’s “Voodoo Chile” as well as Miranda Lambert’s recent chart hit “Baggage Claim”.

Whilst rehearsing for a US tour with Steely Dan, Steve tried and subsequently purchased a Nord C2D Combo Organ.

"The Nord C2D is the most adaptable keyboard I’ve ever come across." he says. "It can be a tone-wheel organ, a vintage euro organ, a pipe organ or two attached, programable midi keyboards, all of which I make use of at various times, and its internal sounds are infinitely useable".

As well as his tour with Steely Dan, June also sees the 30th Anniversary of Steve’s Grammy Award winning solo album “Back In The High Life”.  Steve is currently working on recuts of material from these sessions.

Nord Keyboards are distributed in UK and ROI by Sound Technology Ltd.  For more information please call 01462 480000 or visit www.soundtech.co.uk/nord

The new Nord Sample Editor 4 makes it easier than ever to create custom sampled instruments for your Nord keyboard.…

With 2 sets of physical drawbars per manual, extremely realistic simulations of a B3 tone wheel organ, Vox and Farfisa transistor organs and a beautiful sampled baroque pipe organ the new Nord C2D is the ultimate portable organ solution.…