“…the 440 is one of the most eagerly anticipated reissues in the DOD line, thanks largely to its use by Jonny Greenwood on live versions of Radiohead classics such as Paranoid Android”. 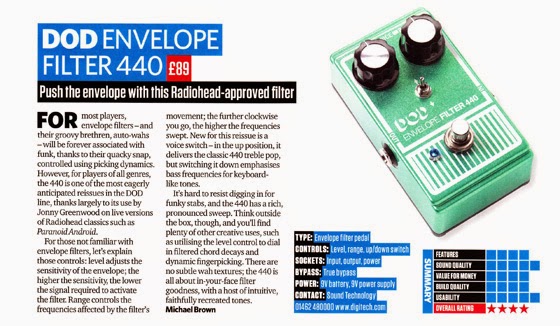 The DOD 440 makes your guitar speak with vowel-like sounds, and cry with slow-filter sweeps that react to your pick attack.  The new addition of the up and down switch lets you choose which part of the sweep you want to emphasise.  Total Guitar magazine review this “in-your-face” envelope filter in the new issue of the magazine.

“New for this reissue is a voice switch - in the up position, it delivers the classic 440 treble pop, but switching it down emphasises bass frequencies for keyboard-like tones”.

“It’s hard to resist digging in for funky stabs, and the 440 has a rich, pronounced sweep.  Think outside the box, though, and you’ll find plenty of other creative uses, such as utilising the level control to dial in filters chord decays and dynamic fingerpicking”.

“There are no subtle wah textures; the 440 is all about in-your-face filter goodness, with a host of intuitive faithfully recreated tones”.

The full review can be found in the Winter 2014 issue of Total Guitar magazine on sale now.  The DOD Envelope Filter is also available now at £89 RRP inc VAT.