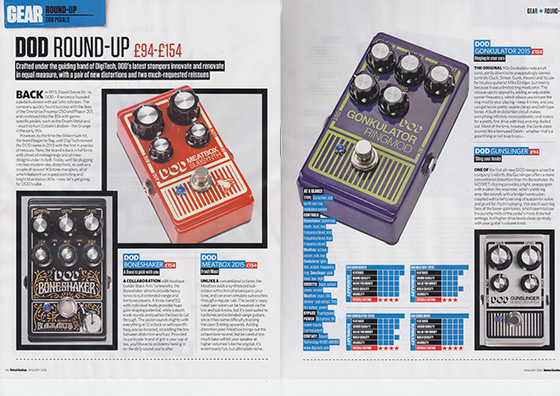 On the DOD Boneshakerr, “A three-band EQ with individual levels provides huge gain-shaping potential, while a depth knob rounds and pushes the lows to cut through.  The pedal sounds mighty with everything at 12 o’clock or with specific frequencies boosted, straddling the line between distortion and fuzz”.

On the DOD Meatbox (2015), “Unlike a conventional octaver, the Meatbox adds a synthesised sub-octave with a hint of envelope to your tone, and can even simulate subwoofers through a regular cab”.  Like the original, it’s enormously fun, but ultimately niche”.

On the DOD Gonkulator (2015), “The reissue ups its appeal by adding an adjustable carrier frequency, which allows you to tune the ring mod to your playing - keep it in key, and you can get some pretty usable clangs and bell-type tones.  A built in distortion circuit makes everything infinitely more palatable and makes for a pretty fine drive…”.

On the DOD Gunslinger, “Its MOSFET clipping provides a tight, snappy gain with a valve-like respond, which yields big amp-like sounds with a bridge hum bucker, coupled with a hefty serving of sustain for solos ad grunt and rhythm playing”.

The full review can be found in the January 2016 issue of Total Guitar magazine on sale now.  The DOD Boneshaker, Meatbox, Gonkulator and Gunslinger are also all available now starting at £94 RRP inc VAT.

DOD is distributed in the UK and ROI by Sound Technology Ltd.  For more information please visit www.soundtech.co.uk/digitech

"If I required a dedicated instrument that felt as well as sounded like a piano, I would find it hard to overlook the…

From explosive chord work to high velocity leads, the new DOD Gunslinger Mosfet Distortion has the touch sensitivity, string-separation and saturation to do all your dirty work. The Gunslinger packs features like separate Low and High tone controls, a wide range of gain, tons of output and your choice of 9 or 18V operation to keep you on target and in control. The Gunslinger’s brushed-metal housing looks as tough as it sounds and its true bypass circuitry keeps your tone pristine.…

“Freq out!” The updated DOD Gonkulator Ring Modulator (2015) has all of the clangy, robotic sounds, of the infamous ‘90’s era original, but with a far more flexible, adjustable, carrier signal control. The adjustable carrier signal allows you to tune the ring modulation giving you the ability to go from slightly-skewed modulation to wildly, atonal chaos. But wait there is more to the Gonkulator than just off-kilter pendulous tones, the Gonkulator is actually two effects in one! The Gonk has an aggressive distortion circuit to further mangle your guitar’s signal.…