“DigiTech is launching a pedal assault from all angles”. 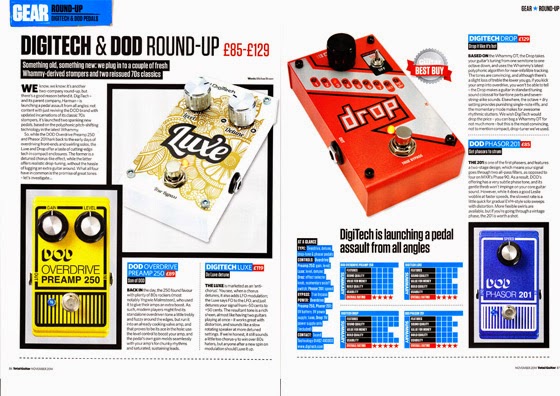 On the DOD Overdrive Preamp 250…”run it into an already cooking valve amp, and that proves to be its ace in the hole: use the level control to boost your amp, and the pedal’s own gain melds seamlessly with your amp’s for chunky rhythms and saturated, sustaining leads”.

On the DOD Phasor 201…”DOD’s offering has a very subtle phase tone, and its gentle throb wont impinge on your core guitar tone…if you’re going through a vintage phase, the 201 is worth a shot”.

On the DigiTech Luxe…”The resultant tone is a rich sheen, almost like having two guitars playing at once - it works great with distortion, and sounds like a slow rotating speaker at more detuned settings”.

fire your arm cannon, breakdance on rooftops and perform a perfect K.O! to the tempo of your song. experience epic…

The DigiTech® Drop is a dedicated polyphonic drop tune pedal that allows you to drop your tuning from one semitone all the way down to a full octave. Get down-tuned chunk without having to change guitars! The Drop also features a momentary/latching switch. With the switch set to momentary, you can turn the Drop into a true performance pedal. Fast trills and roller-coaster pitch dips are at the tip of your toes.…