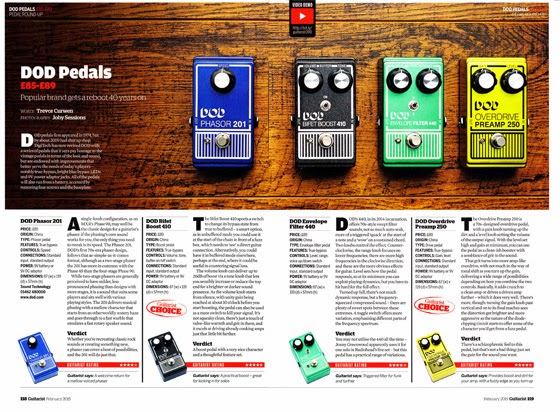 Four of the latest DOD effects pedal reissues are reviewed in the February issue of Guitarist magazine, where the DOD Bifet Boost 410 and Envelope Filter 440 are both awarded Guitarist ‘Choice' awards.

Regarding the DOD Phasor 201…”The 201 delivers musical phrasing with a mellow character that starts from an otherworldly watery haze and goes through to a fast warble that emulates a fast rotary speaker sound”.

Regarding the DOD Bifet Boost 410…”A boost pedal with a very nice character and thoughtful features set - great for kicking in for solos”.

Regarding the DOD Envelope Filter 440…”You may not utilise the 440 all the time but this pedal has a practical range of variations.  A triggered filter for funk and further”.

Regarding the DOD Overdrive Preamp 250…”Basically, it adds crunch to a clean amp or drives a driven amp further - which it does very well.  There’s more though: turning the gain knob past vertical and on to its final reaches sees the distortion get brighter and more aggressive as the nature of the diode-clippng circuit starts to offer some of the character you’d get from a fuzz pedal”.

The full review can be found in the February 2015 issue of Guitarist magazine on sale now.  The DOD Phasor 201, Bifet Boost 410, Envelope Filter 440, and Overdrive Preamp 250 are all available now at £89 RRP inc VAT.

Pro Sound News is the leading provider of features and technology updates for the expanded professional audio community,…