“Both of these reissues deserve to pick up new fans as well as cheering up some old ones”. 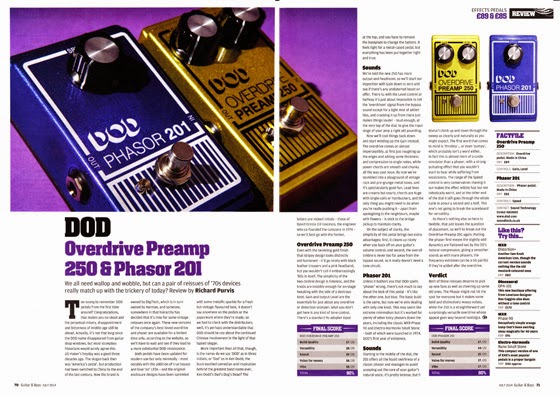 “The overdrive comes on almost imperceptibly, at first just roughing up the edges and adding some thickness and compression to single notes, while power chords are smooth and chunky all the way past noon.  By now we’ve stumbled into a playground of vintage rock and pre-grunge tones, and it’s spectacularly good fun."

“On the subject of clarity, the simplicity of this pedal brings two extra advantages: first, it cleans up nicely when you back off on your guitar’s volume control; and second, the overall timbre is never too far away from the bypass sound, so it really doesn’t need a tone circuit”.

“Starting in the middle of the dial, the 201 offers all the liquid swirliness of a classic phaser and manages to avoid scooping out the core of your guitar’s natural voice”.

“The Phasor might not hit the spot for everyone but it makes some bold and distinctively woozy noises, while the 250 is a straightforward yet surprisingly versatile overdrive whose appeal goes way beyond nostalgia”.

The full review can be found in the July 2014 issue of Guitar and Bass magazine.  The DOD Overdrive Preamp 250 and the Phasor 201 are both available now at £89 and £85 RRP respectively.

Pro Sound News is the leading provider of features and technology updates for the expanded professional audio community,…