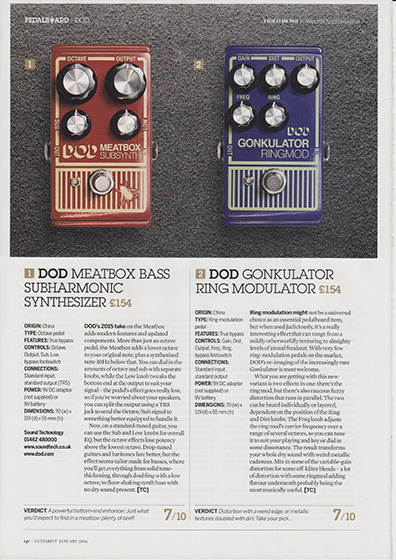 On the DOD Meatbox Sub Synth, “More than just an octave pedal, the Meatbox adds a adds a lower octave to your original note, plus a synthesised note 30Hz below that”.

“A powerful bottom-end enhancer.  Just what you’d expect to find in a meatbox: plenty of beef!"

On the DOD Gonkulator Ring Modulator, “Ring modulation might not be a universal choice as an essential pedalboard item, but when used judiciously, it’s a really interesting effect that can range from a mild otherworldly texturing to almighty levels of tonal freakout.  With very few ring-modulation pedals on the market, DOD’s re-imagining of the increasingly rare Gonkulator is most welcome”.

“Distortion with a weird edge, or metallic textures doubled with dirt.  Take your pick…”.

The full review can be found in the January 2016 issue of Guitarist magazine on sale now.  The DOD Gonkulator Ring Modulator (2015) and DOD Meatbox Sub Synth (2015) are also available now priced at £154 RRP inc VAT.

DOD is distributed in the UK and ROI by Sound Technology Ltd. For more information please visit www.soundtech.co.uk/digitech

“Freq out!” The updated DOD Gonkulator Ring Modulator (2015) has all of the clangy, robotic sounds, of the infamous ‘90’s era original, but with a far more flexible, adjustable, carrier signal control. The adjustable carrier signal allows you to tune the ring modulation giving you the ability to go from slightly-skewed modulation to wildly, atonal chaos. But wait there is more to the Gonkulator than just off-kilter pendulous tones, the Gonkulator is actually two effects in one! The Gonk has an aggressive distortion circuit to further mangle your guitar’s signal.…