"Versatile range of sounds; good control over the top-end; boutique quality without the price tag." 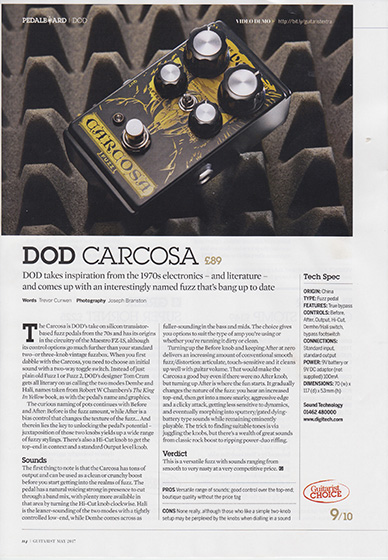 Previously only available in the US, the DOD Carcosa is quite possibly the most versatile and musical fuzz pedal on the market today. Two voices suited to both clean and dirty amps and an AFTER bias control mean there is enough fuzzy madness to satisfy even the most die-hard fuzz fanatic, whilst still cutting through a full band mix.  The Carcosa Fuzz is reviewed in the new issue of Guitarist, where it receives a 9 out of 10 rating and the magazine’s ‘Choice award.

"Instead of just plain old Fuzz 1 or Fuzz 2, DOD's designer Tom Cram gets all literary on us calling the two modes Demhe and Hali, names taken from Robert W Chambers's The King In Yellow book, as with the pedal's name and graphics. The curious naming of pots continues with Before and After: Before is the fuzz amount, while After is a bias control that changes the texture of the fuzz ... And therein lies the key to unlocking the pedal's potential - juxtaposition of those two knobs yields up a wide range of fuzzy stylings."

"The first thing to note is that the Carcosa has tons of output and can be used as a clean or crunchy boost before you start getting into the realms of fuzz. The pedal has a natural voicing strong in presence to cut through a band mix, with plenty more available in that area by turning the Hi-Cut knob clockwise."

"Turning up the Before knob and keeping After at zero delivers an increasing amount of conventional smooth fuzz/distortion: articulate, touch-sensitive and it cleans up well with guitar volume. That would make the Carcosa a good buy even if there were no After knob, but turning up After is where the fun starts."

"This is a versatile fuzz with sounds ranging from smooth to very nasty at a very competitive price."

The full review can be found in the May issue of Guitarist magazine on sale now.  The DOD Carcosa Fuzz is also available now priced at £89 RRP inc VAT.

DOD is distributed in the UK and ROI by Sound Technology Ltd. For more information please call 01462 480000 or visit www.soundtech.co.uk/digitech.

The DOD Carcosa Fuzz is a doorway into an alternate fuzz universe, where classic tones of legend coexist with splattered and shattered Pollock abstractions.…