The DOD Bifet Boost 410 is a guitar volume boost/EQ pedal with a twist – the new Bifet Boost 410 features a Buffer On/Off switch that takes the built-in buffer in or out of the circuit to deliver the best-possible performance from wherever the pedal is placed in the player’s effects chain. 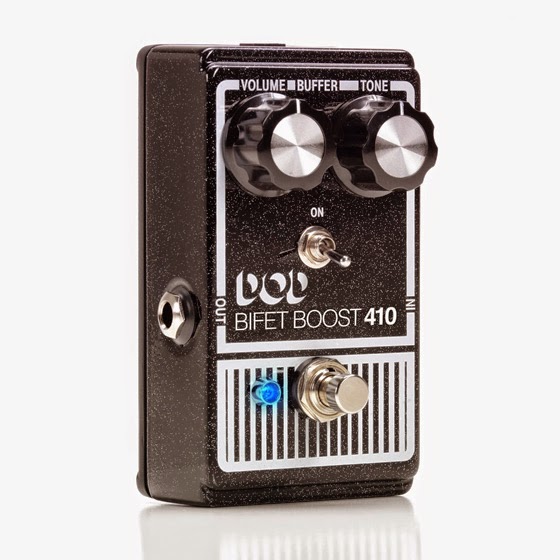 “Some players like to use their pedals in true bypass to maintain a pure signal path throughout their pedalboard, while others like a pedal with a buffer to counter the signal loss of boards that are packed with a lot of pedals,” said Tom Cram, marketing coordinator, DigiTech. “The Bifet Boost 410’s selectable Buffer On/Off makes it adaptable to any player’s setup and sonic requirements.”

In addition, the selectable operation enables the Bifet Boost 410 to be used as the first pedal in the chain in front of a fuzz pedal – many fuzz pedals don’t sound right or react properly to a player’s changes in guitar volume with a buffered pedal in front of the fuzz.

The DOD Bifet Boost 410’s Volume control can deliver up to 20dB of clean boost– enough to add anywhere from a hint of grit to a huge 20+dB of boost to hit the front end of an amplifier and drive an already cooking tube amp into distortion. More than just a straight volume boost pedal, the Bifet Boost 410’s rotary EQ Tone control can tailor the sound from dark and sweet to bright and sparkling and everything in between.

The Bifet Boost 410 also works well as an “always on” pedal to create a “bigger” tone with greater touch sensitivity. Many experienced players will find that using the pedal this way enables them to get an expanded range of dynamics, tonal shadings and overdrive flavors simply by adjusting their guitar volume knob. 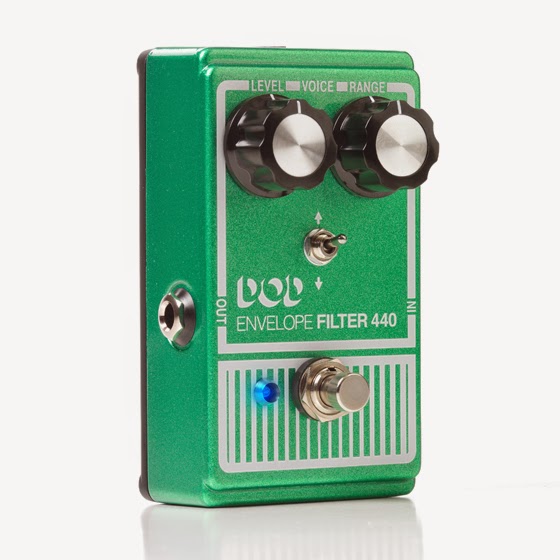 The DOD Envelope Filter 440 is the classic “auto-wah” effect that makes your guitar “speak” with vowel-like sounds. The new Envelope Filter retains the unmistakable voice and touch sensitivity of the sought-after original while adding improvements like true bypass, a 9-volt power adapter jack and a choice of Up or Down effect settings.

“An envelope filter is one of the funkiest and most expressive sounds ever created for guitar, bass or even keyboards and our Envelope Filter 440 delivers all the ‘quack’ and swept filter tones of the original and then some. There’s really nothing else like it and once you’ve tried one, it’s hard not to resist the way it makes solos and rhythm guitar parts stand out and groove,” stated Tom Cram, marketing coordinator, DigiTech.

The DOD Envelope Filter 440’s Up setting delivers that classic quacking envelope filter “wah” effect, while the new Down setting emphasises the lower frequency range – great for bassists who want to rock a room with huge, thundering dub bass. The Level knob adjusts the sensitivity of the envelope to tailor the response of the pedal based on pick or finger attack. With a higher sensitivity, a player won’t have to hit the strings as hard to trigger the effect and vice versa. The Range knob controls the frequency range of the envelope’s sweep – turning it counter-clockwise sweeps more low frequencies and turning the knob clockwise sweeps more of the high frequencies. The Voice switch toggles between the Up and Down settings to choose which part of the frequency spectrum the player wants to emphasise.

The new Envelope Filter 440 feature’s true bypass operation, which keeps the tone of the instrument pristine when the effect is not in use – unlike the original, which would colour the tone even with the effect switched off. The 9-volt DC power supply input makes the Envelope Filter 440 far more pedalboard-friendly and its bright blue LED indicator is easy to see even on outdoor stages in bright sunlight. And along with its singular sound, there’s no mistaking the pedal’s retro-cool graphics and bright green paint job.

The DOD Bifet Boost 410 and DOD Envelope Filter 440 are both available now at £89 RRP inc VAT.

DigiTech is distributed in the UK/ROI by Sound Technology Ltd.  For more information please visit www.soundtech.co.uk/digitech or call 01462 480000.