"A good alternative if you don't need the treadle: instant Whammy effects in a simple package, 9/10". 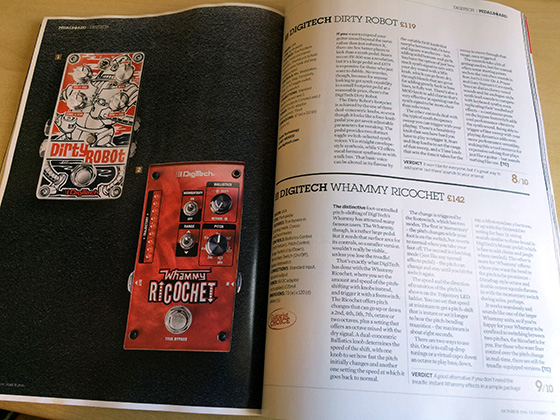 Two of the latest DigiTech compact pedals are reviewed in the new issue of Guitarist magazine - the Whammy Ricochet pitch shift pedal and the Dirty Robot stereo synth pedal.  Both receive great reviews with the Ricochet picking up the magazine’s ‘Choice’ award.

On the Whammy Ricochet, “It works seamlessly and sounds like one of the larger Whammy units, so if you’re happy for your Whammy to be confirmed to switching between two pitches, the Ricochet is for you”.

On the Dirty Robot, “You can dial in chewy vowel sounds and fat analogue-style synth lead sounds to compete with keyboard synths, even replicating their ‘mod wheel’ effects - a continuous press on the bypass footswitch adds cool performance vibrato to the synth sound”.

“Being able to trigger a filter sweep with your playing dynamics adds even more performance versatility, making this a cool resource for expressive soloing that plays just like a guitar - but sounds nothing like one”.

The full review can be found in the October 2016 issue of Guitarist magazine on sale now.  The DigiTech Whammy Ricochet and Dirty Robot are also available now priced at £129 RRP inc VAT.

DigiTech is distributed in the UK and ROI by Sound Technology Ltd. For more information please call 01462 480000 or visit www.soundtech.co.uk/digitech.

The Whammy Ricochet lets you bounce your playing up or down in pitch in controlled or crazy shifts. A momentary switch and customisable independent rise and fall time ballistics, allow you to get the Whammy action you know and love without the use of a treadle. Just hold your foot on the foot-switch and let the Ricochet do the rest. Seven pitch selections: 2nd, 4th, 5th, 7th, Octave, Double Octave, and Octave+Dry, as well as a toggle to select up or down for the selected pitch. The Whammy Ricochet also has latching foot-switch mode so you can rise or fall to pitch and stay there, and an LED…

The Dirty Robot is a unique synthesiser emulation pedal for guitar and bass. Two different synth voices are at your disposal for creating wild sound textures using a standard guitar or bass without the need for any special pickup. V1 gives you warm analog synthesis with subtle to extreme envelope sweeps just like classic synths from the undefined’s and 80s. V2 provides a vocal formant synthesis effect that can be used for vocoder emulation or talk box style effects. Using the Dirty Robot’s exclusive 360 degrees Drift knob, you can blend between Square, Octave, and Sub synthesis…