"There are two sides to the Obscura, the first being as a conventional delay with unprecedented fine control over the sound over the repeats.  Its other side is as a knob manipulator’s dream machine - if aural mayhem is your thing, you’ll love this pedal,  9/10”. 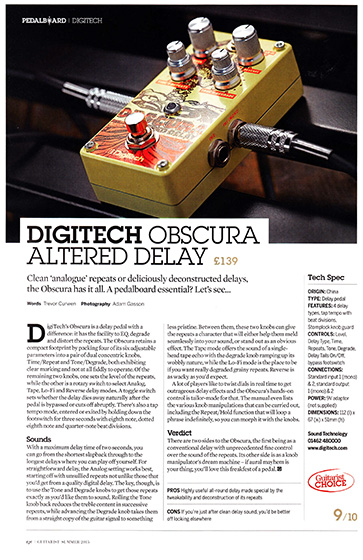 The DigiTech Obscura Altered Delay pedal is reviewed in the latest issue of Guitarist magazine where it receives a nine out of 10 rating and the magazine’s coveted ‘Guitarist Choice’ award.

“DigiTech’s Obscura is a delay pedal with a difference: it has the facility to EQ, degrade and distort the repeats”.

“The key, though, is to use the Tone and Degrade knobs to get those repeats exactly as you’d like them to sound.  Between them, these two knobs can give the repeats a character that will either help them meld seamlessly into your sound, or stand out as an obvious effect”.

“A lot of players like to twist dials in real time to get outrageous delay effects and the Obscura’s hands-on control is tailor-made for that”.

“A highly useful all-round delay made special by the tweakability of its repeats”.

The full review can be found in the Summer 2015 issue of Guitarist magazine on sale now.  The DigiTech Obscura Altered Delay pedal is also available now at £139 RRP inc VAT.

DigiTech is distributed in the UK and ROI by Sound Technology Ltd. For more information please call 01462 480000 or visit www.soundtech.co.uk/digitech

The Obscura Altered Delay from DigiTech allows you to turn your delays upside down and inside out.  The Obscura’s four delay types can be darkened, degraded and distorted on the fly with the stacked Tone and Degrade controls. Combine these controls with the Obscura’s Repeat/Hold feature and lose yourself in long, trippy, gurgling repeats or backwards-manipulated sonic mayhem.  …