Pioneering prog metal act TesseracT have achieved a new standard for outlandish gig locations by playing the first ever set on an igloo, thought to be the world’s biggest. The performance featured a Crush Acrylic kit, an AKG Drum Set Premium microphone set and an AKG IVM4500 In-Ear Monitoring System. 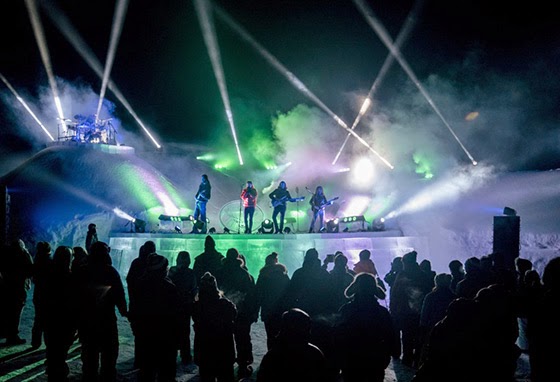 Photo above: Tesseract perform on a giant igloo as part of the Jägermeister Ice Cold Gig series in Lapland

The immense snow structure, spanning the equivalent of 3.5 double decker buses near Yllas village, Finland, was part of the Jägermeister Ice Cold Gig series, which puts artists to the test as they perform in unconventional, ice cold conditions.

The stunning location played host to the hour-long show which included fan favourite track Nocturne.  The gig was performed to a unique crowd, pulling in reindeer, skiers, and Sami tribesmen from some 20-50 kilometres away.

In the words of drummer Jay Postones, “The acrylic kit looked and sounded perfect! I had ice crystals forming on the drumheads during the show which had me a little worried but the whole kit sounded absolutely amazing and withstood the brutal temperatures and my beating them. I'd say that's a fairly unique challenge".

Try a Crush Drums kit in-store before the 31st of March for a chance to win one of four Crush snares.Crush Drums UK/ROI…

A Sublime showing - Crush Drums at the London Drum Show 2014

Kurzweil Music Systems and UK distributor Sound Technology Ltd are pleased to announce the PC4-7 and SP6-7.Expanding on…

"At this point I could spend a paragraph or two pontificating, but instead I'll cast cool professionalism aside and…

The set includes an SST4500 IEM wireless stereo transmitter with built-in audio effects such as a dbx compressor and EQ, an SPR4500 IEM stereo wireless receiver and IP2 in-ear headphones.