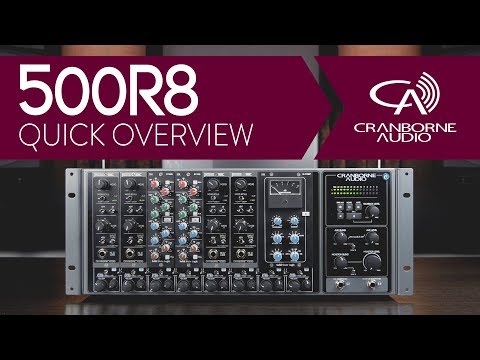 500R8 is the centrepiece to the modern studio. It's an analogue/digital hybrid USB audio interface that combines our favourite analogue characters with digital precision by offering a completely customisable 500 series analogue front-end as well as an abundance of high-performance AD/DA conversion that is required for the modern DAW-based workflow.

It also features all of the studio essentials you need such as a comprehensive monitor controller with talkback facility, 16 channel ADAT interface, Zero-latency artist mixer, and 8-into-2 analogue summing mixer.

The Best Of Analogue Character - Thanks To 500 Series

500R8 puts performance capture back at the heart of your recordings and back into the hands of the audio engineer. By capitalising on the vast and ever growing 500 series market, 500R8 allows you to configure your own custom analogue front-end directly into your DAW for recording. Fill 500R8 full of vintage preamps for recording drums, clean and pristine preamps for recording strings, or even create you own Preamp/EQ/Compressor channel strips and commit those to your recording; the possibilities are endless.

500 series integration doesn't stop once the performance has been captured... Dedicated USB source-select switches for each 500 series slot allows you to send your recorded stems/VSTs back through your 500 series EQs/Compressors and print their effects back into your DAW for hands-on, all-analogue processing. 500R8 also features an 8-into-2 high-headroom analogue summing mixer that you can use to sum your instrument stems into a stereo track to be recorded back into your DAW using a dedicated stereo ADC.

Having a near-limitless selection of analogue preamps to pick from would be pointless if 500R8's conversion applied its own colour and effects. In order to capture every subtle nuance of your analogue signal, 500R8 features reference-class analogue-to-digital conversion with 121dB (unweighted) signal-to-noise ratio and a master-reference grade internal digital clock with ultra-low jitter (0.5 picoseconds). The combination of highly-accurate, low-jitter clocking and high-performance, low-latency digital conversion ensures that every ounce of analogue character is captured with the utmost detail - free of unwanted digital artefacts from the conversion process and with a wide dynamic range thanks to 500R8's high-headroom and low-noise floor analogue design.

Cranborne Audio's USB 2.0 audio interface implementation provides the high channel-count requirement at the lowest possible latency whilst still being accepted by all major recording devices with unparalleled stability and longevity. 500R8 is core audio compliant for Mac and features a lightweight control panel for Windows machines that absorbs as little resources as possible to leave you with more power for plug-ins in your DAW.

In the interest of being compatible with the widest range of devices, 500R8 also includes a full complement of 5-pin MIDI I/O, Word Clock I/O via BNC, and S/PDIF I/O at sample rates up to 192kHz.

Hearing how your mix translates on a wide range of reproduction mediums is a crucial part of a modern studio environment. To facilitate this, 500R8 features a comprehensive monitor controller with a ultra high-headroom (26.5dBu) balanced speaker A Output, a discrete speaker B output, and seamless speaker switching between the two. There's also a Mono button that sums L-R channels to check for mono compatibility, a DIM switch that drops the control room output for relaxed discussions during recordings, and a speaker mute switch for when you are tracking in the control room with headphones.

500R8 moves away from clunky "virtual" mixers and gets your hands back onto the mix by using a high-headroom analogue summing mixer to create zero-latency, all-analogue artist mixes that can be blended with the one of two discrete DAW playback paths and sent to your musicians via CAST or the local headphone outputs.

Analogue summing can give your mix the final bit of analogue character required to achieve professional and polished sonic results. What makes 500R8's 8-into-2 channel summing mixer so special is that it is positioned after the 8 500 series slots - allowing you to insert saturation or subtle 'bus-compression' modules and create a stereo mix using dedicated analogue level and pan controls. 500R8's summing mixer also has a dedicated ADC which can be used to send your stereo mix into your DAW with a massive 26.5dBu of headroom.

500R8 has 4 CAST In ports that allow you to connect any of our breakout boxes (to be announced soon) and place analogue I/O where you need it - whether it's in the live room, vocal booth, or the bedroom next door.Our clever impedance matching means that the signal quality can exceed that of a mic cable for a fraction of the price and over a distance of up to 100m. CAST is 100% analogue and requires ZERO setup. Plug one end of the cable in one box, and the other end into 500R8 and it just works. No setup. No latency. No fuss. And it sounds great.

Manufactured in the UK

To ensure that every product bearing the Cranborne Audio name is worthy of studio environments big or small, all 500R8's are manufactured in the UK under the company's founders and their watchful eye's. 500R8 is carefully assembled by a skilled workforce with immense attention to detail and each and every product is tested thoroughly by a skilled engineer before shipping to destinations around the world.

500R8 and 500ADAT are two revolutionary 500 series racks featuring elite-quality AD/DA conversion, ultra low-jitter clocking, summing mixers, and reference headphone amplifiers built-in to their 4U frames. Both are designed to integrate all the benefits of 500 Series modules into brilliant hybrid studio workflows not previously possible. But whilst on the outside their differences look minimal, these two racks are designed for completely different users - integrating into your studio in completely different ways.

"The 500R8 could easily be the centrepiece of any serious recording/mixing setup: it's a top-notch audio interface, a capable 500-series host chassis, an expandable analogue summing mixer, and more besides." - Read the full review from Sound on Sound here

Put simply, Camden 500 is the most astoundingly clean, linear, and transparent preamp you’ve ever heard.Camden 500 was designed from the ground-up to be the ultimate front-end for the modern studio and engineer and to withstand the rigours of modern workflow and production techniques. It features a completely original, custom-designed ‘Camden’ preamp topology that achieves stunning low-noise and low-distortion performance as well as frequency and phase linearity at all gain settings. The sum result is -129.8dB EIN (150ohm, unweighted), THD+N as low as 0.0002%, frequency response of…

500ADAT is the perfect tool to increase the I/O count of any ADAT-equipped audio interface.…