The Symphony I/O Mk II Dante option card uses Audinate’s Brooklyn II module which features plug-and-play media networking for up to 32 bidirectional channels at 96kHz and 16 bidirectional channels up to 192k. The system can be configured with a number of custom options ranging from 8-32 analog I/O channels. Symphony I/O MK II Dante allows up to 32 channels with ProTools and redundant Dante connectivity to be fitted into a single two space rack device providing the smallest footprint available with this feature set. 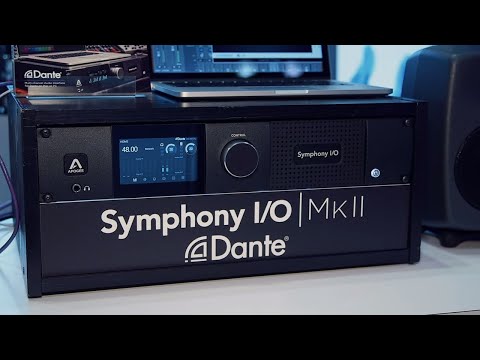 Please check back here very soon for an updated list of authorised resellers of Apogee products in the UK and Ireland.

Symphony I/O mk II Thunderbolt is the most powerful multi-channel audio interface for Thunderbolt-based Mac workstations.  Designed for the home or professional studio running Logic Pro X or any other native based DAW, this system offers your choice of 4 different base I/O configurations with the option to expand up to 32×32 simultaneous channels per unit while still maintaining incredibly low latency.