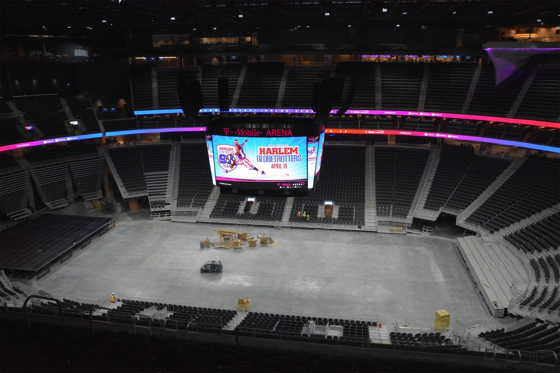 “In today’s sports arena market, the fan experience is critical to success and having a high-performance, full-bandwidth system is a huge part of the experience,” said Michael MacDonald, President of ATK Audiotek. MacDonald served as the Project Manager for the T-Mobile arena installation. “Sound quality is so important that the original design was actually revised and upgraded to increase the performance level to ‘concert quality.’”

MacDonald explained that the arena’s main six-cluster sound system that hangs next to the scoreboard was designed by Dallas-based system design and consulting firm, WJHW. The principal consultant was Scott Bray. The clusters consist of 72 JBL VTX V25-II elements and 36 JBL VTX S28 subwoofers powered by 18 Crown VRacks. The JBL VTX line array clusters are definitely the centerpiece of the system.

“Performance, coverage and rider acceptance all drove the decision to go with the VTX V25-II, but in the end, it’s the overall value that is the deciding factor. The VTX V25-II sounds great and has astounding output and bandwidth,” said MacDonald. “It’s a high-fidelity, high-output system for sports and other events, and it can be reconfigured and moved to be used as the primary sound system for music performances. It can even be moved up into the scoreboard garage to clear the airspace for large-scale televised events, like the Billboard Music Awards.”

“This system features cardioid subwoofer arrays that Scott Bray designed specifically to direct the infrasonic energy toward the audience seating areas and away from hard wall surfaces and the roof structure,” said MacDonald. “The JBL VTX S28 subwoofers have the power and bandwidth characteristics that fit the design criteria well, including ease of rigging and out-of-the-box amp DSP settings that have outstanding performance.”

As for amplification, in order to meet the system design requirement for application flexibility and performance, coupled with the requirement for fast and easy installation deployment, MacDonald explained that the Crown VRack was the natural choice.

“The Crown VRack system is extremely well thought out. The system is sturdy, lightweight and has internal rigging that allows them to be flown in projects where space is at a premium,” said MacDonald. “The semi-portable nature of the installation is unique and provides the operations staff high audio performance coupled with ultimate flexibility.”

“The collective opinion shared by everyone involved is that this is one of the best acoustically designed and best-sounding arenas in the U.S. The acoustic treatment is everywhere and helps tame the usual challenges in a room this size,” said MacDonald. “The coverage aligns well with the audience areas in the room while keeping energy off of the wall surfaces. Bandwidth of the system is superior to most systems found in arenas, and it has a wide open natural sound that is low in distortion, that is easy to listen to and does not create fatigue for the audience.”