The famous gothic St. Michael’s Cathedral (better known as Coventry Cathedral), reduced to a ruined shell after its bombing during the Second World War, and subsequently rebuilt in a celebration of 20th century architecture, has been a place of Christian worship for over 1,000 years.

However, it had long found that the quality of its audio fell short of its majestic interior. Recently RaceTech’s Head of Audio Engineering, Robin Dibble, returned 20 years after implementing a revolutionary analogue solution, known as the Coventry Reciprocating Delay and devised by his acoustician father, Ken Dibble. This time it was to lead the Cathedral into the digital age via BSS Soundweb London signal distribution architecture, which will future-proof it for years to come. 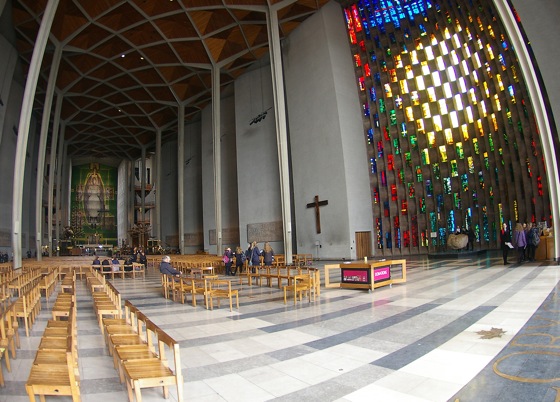 “But with our original solution, no matter what area of the Cathedral a microphone was plugged into, the system was inherently time aligned in both directions, both up and down the length of the building,” remembers Robin Dibble. “We used a huge rack of hand-wired summing amps, single delays and modular automatic microphone mixers.”

But in the intervening years the Cathedral sound had been questionably maintained, and so the call for help went out to the Dibbles again. Robin arrived on site to discover that most of their original installation had been stripped out and replaced merely by a distribution amp and a couple of simple mixers.

However, the amplifier and loudspeakers originally specified were still fit for purpose — and six channels of radio mics (and RF assisted listening) have been brought in to augment the six classic AKG C747’s originally specified. For signal transport Soundweb London provided the obvious and most cost-effective solution.

BSS Audio’s proprietary DSP platform has been Robin Dibble’s ‘go-to’ solution for most of his installation projects since joining RaceTech 15-plus years ago.

This time he has specified a Soundweb BLU-160, which offers configurable I/O and signal processing plus a high bandwidth — with proprietary BLU-Link, BSS Audio’s Digital Audio fault-tolerant bus. This 256-channel solution can use standard, inexpensive Cat6 cabling (linking BLU-Link compatible devices over a distance of 100 metres). 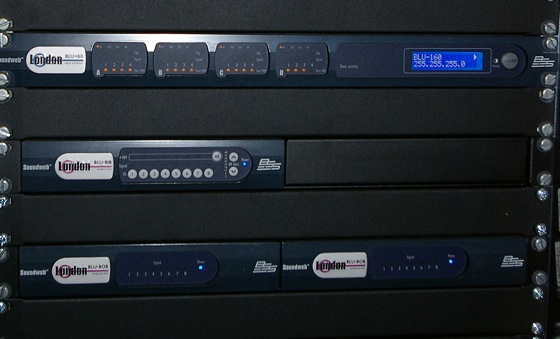 The BLU-160 is configured 16-in/0-out ... but by expanding the I/O capacity with an 8- input BLU-BIB and two 8-output BLU-BOB break-out boxes Dibble has been able to increase the routing capability to 24-in/16-out. These operate under master AMX control with an intuitive, portable and wireless 9in touch screen. The base for this is installed in a console at the rear of the cathedral, for use by the vergers and officiating clergy. The equipment rack, housing amps, DSP and radio receivers, is in a dedicated room immediately behind.

“Using Soundweb has made everything so much easier,” Robin Dibble reports. “What was previously a huge issue, with so many channels requiring EQ and delay, is now a breeze — and there is so much processing power that just one BLU-160 is operating at only 52% capacity. And since the entire solution — auto mic mixing, time alignment, multi-delay zones — is built into Soundweb it provides a completely different way of optimising the sound.”

Most of the available inputs are assigned to fixed and roving mics, while there are three aux inputs for line music playback — controlled on the touch screen (with overall volume control and separate level control for the radio mics). “It couldn't be simpler,” he says. “There is a Wi-Fi network so the system can be accessed from the chancel or nave.”

Soundweb has made the whole process incredibly straightforward, he says. “The BSS experience is never anything other than positive, whether it’s back-up or technical support [from UK and Ireland Harman Professional distributors, Sound Technology Ltd]. I have never looked elsewhere as this has been by far the most cost-effective solution.

“As for Blu-Link, this provides big system cost savings as there are no network switches, no extra cards and it’s self redundant. The result is a better sound quality, and I have only had positive comments, as no-one believed such a sound as this would be possible.” 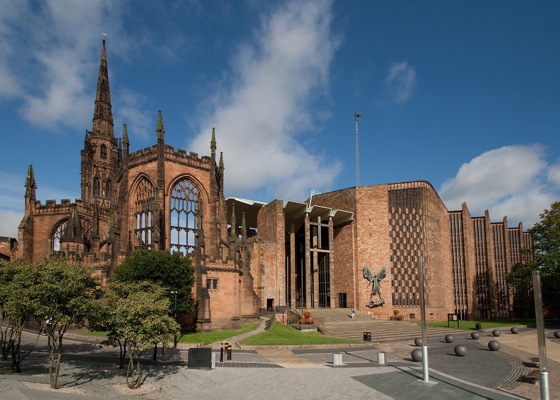 Coventry Cathedral Head Verger, Jenny Thurston, comments, “The audio installation provided by RaceTech has greatly improved the audio quality of our corporate worship and the diverse range of events the Cathedral hosts . The simple touch screen control is proving on the whole easy to use, a significant factor incorporated in the installation as the Cathedral system is operated by various staff and volunteers. The sound is clear and evenly distributed, the system is coping well, utilised in isolated areas for small gatherings through to full Nave congregations of 1200 people.

“The installation process by RaceTech was very considerate and sympathetic to our environment and has proved extremely supportive. We are pleased that the relationship continues for the future.”

But the final word comes from the Cathedral precentor The Rev. Canon Dr. David Stone, who quipped, “It used to be said ‘Why go to Coventry Cathedral ... it’s cold, you can't see anything and you can't hear anything’. Well we’ve now sorted one of the three!”