Acoustics consultant Martin Grainger, of Co. Tyrone-based Grainger Communication Ltd., has long been renowned in Northern Ireland for his ability to improve the audio intelligibility in highly reverberant church environments, while boosting their AV capability. 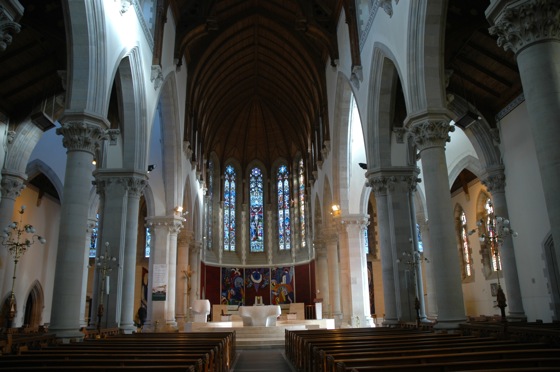 But since JBL introduced its radical CBT70J Constant Beamwidth column arrays he has really gone into overdrive. “We like this product a lot,” he says. “It’s absolutely fantastic, with good sensitivity; it delivers great acoustic energy, has good frequency response and we try and get that into most of our church jobs.”

Recently Grainger put his theory to the test in one of Ireland’s heritage buildings — St. Macartan's Cathedral in Co, Monaghan whose construction dates back 150 years.

“The old sound system had been installed 30 years previously — it was speech only and towards the end of its life it became unreliable. We were called in to provide a solution but knew they would have to strip out the entire infrastructure. It’s a big cathedral, holding between 700-800 people, but we knew we could provide even coverage with just six CBT70J’s.”

Designed in 14th-century Gothic architectural style, with a reverberation time between 4-5 seconds, Martin Grainger conducted acoustic measurements. “It’s a cruciform shaped building and we quickly worked out we would need six CBT70J loudspeakers to cover the congregation area,” he said. The white speakers were sprayed grey to colour match the stone pillars and render them virtually invisible.

Tuned for speech and music at St. Macartan’s Cathedral they have been installed with a pair in left/right stereo at the front of the church and two more delayed back at the mid-point (forming Zone 1), with a CBT70J in each of the two transepts (left and right) forming Zones 2 and 3. A further two JBL Control 25’s have been installed at the back of the sanctuary (Zone 4) to enable the clergy to hear the sound from the microphones, positioned some distance in front.

The challenges confronting Grainger Communication’s site crew included working in a listed building, interfacing with some of the pre-existing equipment — but mostly working in an environment which is constantly in use and difficult to gain access to.

“We had to maintain the old system right up to the point where we were ready to switch over because the duty cycle is intense, with a lot of unexpected events suddenly taking place. We had one day only to switch over to the new system.”

Around the same time, Grainger Communication also designed a similar solution for the nearby St. Joseph’s Church — which was designed by the same architect, William Hague — using four more CBT70J’s and AKG GN155’s, processed through a BSS Soundweb BLU-100 DSP.

All JBL, AKG, Soundcraft and BSS components are distributed in the UK and Ireland, as part of the Harman Professional portfolio, by Sound Technology Ltd.