Situated in the centre of Dublin city, the 82,300 capacity Croke Park stadium recently undertook a major upgrade to its sound, communications and voice evacuation systems, courtesy of locally based A-V integrator, Mongey Communications. 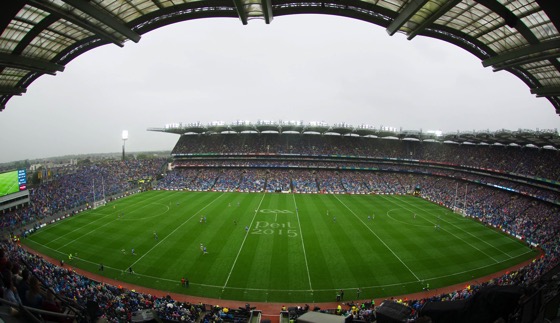 Known as the home of those fast-moving and much loved Gaelic games (primarily Hurling and Gaelic football), and accustomed to hosting a wide range of complementary events — including rock concerts and conferences — Croke Park’s audio technology has to operate flawlessly seven days a week. However, the existing systems had become outdated, requiring constant maintenance and lacking the necessary flexibility.

Based in Co. Kildare, Mongey Communications have a long term relationship with the client and operate an existing maintenance contract. “Because of the age of the old system and the inevitable support issues this created, we were making so many service calls that our strong recommendation was to replace it outright,” recalls David Mongey. “ And Alan Gallagher, Head of Stadium Operations at Croke Park simply said ‘What do we need to do?’”

After considering their options, the integrators, in consultation with Gallagher, chose an integrated HARMAN stadium solution combining JBL, Crown and BSS Audio components, supplied by UK and Ireland distributors, Sound Technology Ltd; this met all the requirements laid down by acoustics consultants, Vanguardia.

With assistance from Ben Todd, Sound Technology Ltd’s Project Engineering Manager, the project team evaluated the design options based around the existing stadium infrastructure and cabling – a large scale project spanning 60-plus individual paging zones, around 280 speaker lines and just short of 2,400 speakers. 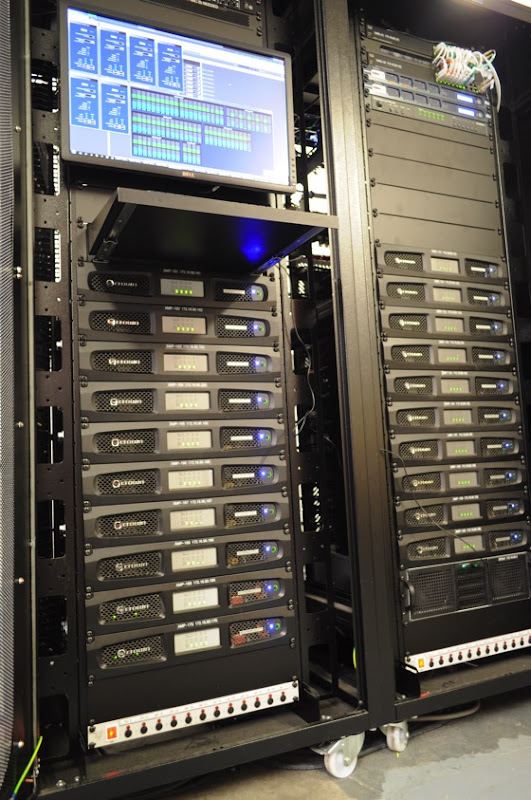 “Having an existing Soundweb backbone was one reason we decided to stay with a Harman / JBL solution — the other being that we run a JBL VerTec VT4886 Subcompact in our rental stock,” Mongey continued. “The best sound system I ever heard at Croke Park was when we combined that with the house system. It’s fully integratable, so when we bring this in for special events (such as the biennial Croke Park American College Football Classic) in future we can plug straight into the system and run it over Dante, which offers a far better, more integrated and seamless workflow.”

The system is controlled by HARMAN’s proprietary HiQnet Audio Architect and London Architect software, programmed by David Howe of Audomation Software, while the new racks — which offer far greater efficiencies and economies — were configured by LBI Projects, who were also responsible for speaker line and associated terminations.

Prior to finalizing the system design, the integrators had carried out their own extensive audit of speakers and cabling, identifying and mapping in detail every audio source and destination in the stadium. David Mongey explained, “It was a complete root and branch review which told us what we needed to do within the budget to bring the system to the next level — and this was essentially life safety PAVA, paging / public address and event day entertainment throughout the stadium bowl.

The choice of the AWC82 had been entirely logical,” declares Mongey, “The sound is absolutely outstanding and it offers better distribution than the previous drivers.” These are evenly spaced to form a distributed system throughout the main (lower) balcony tier, addressing a legacy issue of poor sound quality in these areas dating back to the pre-existing sound installation.

The new system also had to integrate with existing equipment that included other Harman components, such as Intellivox speaker column / amplifier arrays (which provides coverage for the ‘Hill16’ open terrace). The matched IntelliAmps also had to be integrated into the new control and monitoring set-up, alongside the new generation Crown 4-channel DCI DriveCore amplifiers (with BLU Link). These comprised 54 x Crown DCi4/300N (4 x 300W) and 24 Crown DCi4/1250N (4 x 1250W), while the first generation Soundweb 9088s have been replaced by four I/O configurable BSS BLU-806 (with Dante) and10 BLU-326 expanders.

This offers a much more elegant solution, with greater processing power and lower latency — and a significant reduction in rack size (almost 30 fully-fitted full-height 19” racks with their equipment still on board had been wheeled out of the stadium for environmentally friendly recycling as part of the project, to be replaced with just six comparably sized racks, reflecting the technological improvements in audio engineering that have taken place over the years). “As a result, the power requirement is lower and the air conditioning systems no longer need to be on full whack,” observed a Mongey Communications spokesman. Power redundancy was a further issue, and each rack room is fully supported by a monitored UPS system.

Real time fault recording and reporting were key features of the new installation, with all key system functions and variables fully supervised and tracked. Critical faults are reported immediately at the stadium fire alarm panels allowing these to be investigated promptly by the stadium security team. In addition, any critical faults are emailed at the time they arise to key Mongey Communications support staff for follow-up, and the system also provides a digest of its status (including details of any minor or non-critical faults) on a daily basis for further investigation by the same support team.

The new fit-out has been further streamlined by the custom software front end written by David Howe — and both the Security Control Room and the Event Control Room have benefited from the simplicity of new, user-friendly touch screen paging and control interfaces. 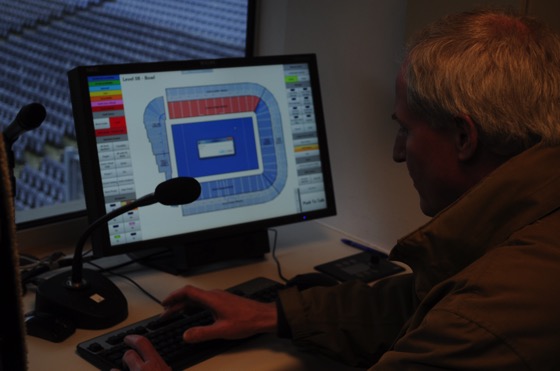 Photo above: Kevin McGrath with the system’s custom interface design by David Howe

A Soundcraft Si Performer 2 master mixing desk in the Event Control Room was supplied as part of the project with direct Dante feeds into the stadium audio network, providing greatly improved control, flexibility and resilience. 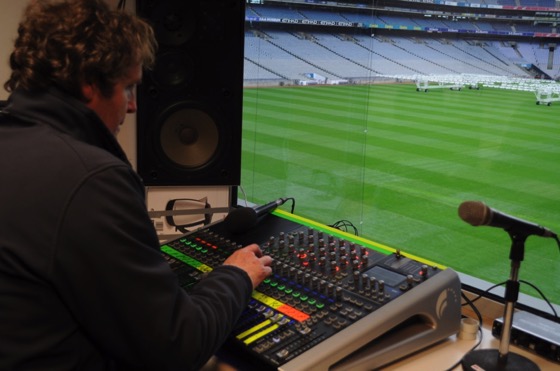 Photo above: Evin Doyle in the event control room with the Soundcraft Si Performer console equipped with Dante® interface card

“There are a number of areas where the system can operate and there are distinct rooms for PA mixing, Visuals and Hawkeye,” David Mongey explains. Mixing desk positions have also been created for the side of the pitch from where they can submix or plug into the patch panel at the Event Control Room mixing desk, with the on-pitch entertainment linked to the big screen.

The systems also feature fully supervised interlinks with the stadium life safety / fire detection systems, which comprises live speech and pre-recorded voice-evac announcements, which can be triggered automatically from the fire panel, with fireman’s mic sets additionally as further back-up in three locations.

The new Harman Professional solution comfortably meets all of Vanguardia’s criteria for speech transmission (STI) and sound pressure (SPL) — as well as the Local Authority’s off site noise monitoring thresholds (since Croke Park is in a densely populated area and susceptible to noise pollution).

David Mongey reflects on a highly professional job, praising the management and scheduling maintained by his project manager. “The massive challenge was the short time scale and the most difficult element was getting the old system out and finding he opportunity to fine tune the new system, all within the working life of a busy stadium.

“Everyone supporting the installation worked well together with invaluable help from Ben Todd and Joe East at Sound Technology, Jerome King at HARMAN, and the HARMAN EMEA Apps team.

“As for the [JBL AWC82] under-balcony speakers, we are so impressed that we have just ordered a large quantity for our own hire stock.”